A Dialogue of Civilizations Led to Friendship and Joint Research 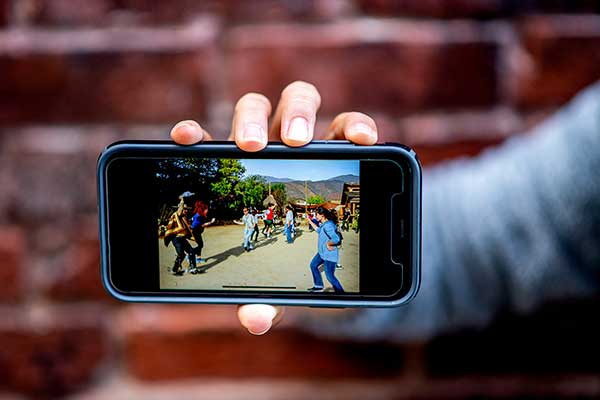 After a Dialogue of Civilizations course with ECE Associate Professor Charles DiMarzio, a group of students teamed up to research a better method of visualizing collagen monomer orientations.

This idea traveled from the Andes to the Green Mountains. Three years later, it’s finally published.

In 1921, Benton MacKaye climbed to the top of Stratton Mountain in Vermont and dreamt up the Appalachian Trail. Nearly a century later, while eating lunch at the same summit, Rickard Stureborg, Anuj Gajjar, and Rodrigo Alzola also had an idea, though theirs was much smaller in scale. The three engineering students envisioned not a 2,000-mile footpath, but a method for measuring molecules so tiny no camera can capture them.

Three years later, their technique for visualizing the nearly undetectable specks of matter that make up most proteins was published in The Journal of Biomedical Optics.

But this story doesn’t actually begin in the alpine forests of Vermont. It starts much farther south in the backdrop of a different mountain range, the Andes. In 2018, Stureborg traveled to Santiago, Chile, for a Dialogue of Civilizations, a 30-day immersive study abroad program, led by Charles DiMarzio, associate professor of electrical and computer engineering at Northeastern. Students take two courses during the program—one Spanish language and Chilean culture course, and one biomedical imaging course, taught by DiMarzio.

“We started working on a project together right away,” says Stureborg, who graduated in 2020. “We became friends very quickly. He showed me all around Santiago. He knew eventually he wanted to come to Boston to do research with [DiMarzio], so we kept in touch.” Exactly one year later, Gajjar attended the same Dialogue of Civilizations in Santiago, and after fostering his relationship with DiMarzio during the intensive study abroad experience, started working in his lab upon returning to campus.

Soon after, Alzola fulfilled his goal and came to Northeastern to do research in DiMarzio’s lab as an exchange student. There, he met Gajjar and started working on a project they would eventually publish together—a method for better visualizing collagen fibers in order to further understand how these essential proteins form.

Once Stureborg caught wind that Alzola was in town, he knew it was his turn to show the exchange student around his city. “I got a drink with him when he got to Boston, and eventually we all went on a hike together,” Stureborg says. And that hike was the day Stureborg joined Gajjar and Azola on the project. The hike was organized by DiMarzio, who likes to take students on smaller excursions, such as day hikes and ski trips, when he’s not leading study abroad programs in Chile.

“It’s not the first time my students have come up with ideas for joint projects on one of these hikes,” DiMarzio says. “It’s a good way for people to make connections.”

DiMarzio stopped taking students to Santiago after the trip in 2019 because of the pandemic, but he’s hopeful that the Dialogue will resume this spring. “I fell in love with the country, and I can’t wait to go again. I’ve been back twice with my grandson to ski,” says DiMarzio, proving again that work can be pleasure (and leisure can lead to work) if it involves a trip to the mountains.