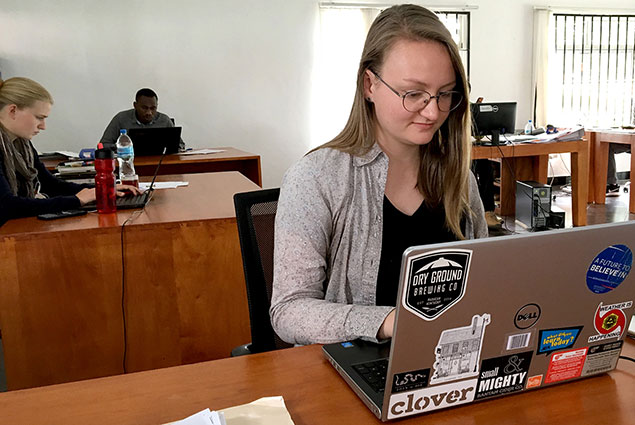 Erin Burba, BS Computer Engineering/Computer Science 2020, acknowledges that she initially felt anxious about her first global co-op, working for a company that brings solar power to Tanzania, a country where 70 percent of the population has no electricity.

In Arusha, the gateway city to Mount Kilimanjaro and Tanzania’s safari destinations, Burba encountered stark differences from daily life in the United States. Her evening commute home involved walking up a dirt road accompanied by a herd of cows and goats. She found it disconcerting when bystanders would call out “mzungu”—an East African term for white tourists. Negotiating prices for taxis and groceries was unfamiliar to someone who had grown up in Kentucky and studied in Boston, even as she picked up the language Kiswahili and could stand her ground better.

“I didn’t know too many people, or how to get around town,” said Burba, who is studying computer engineering and computer science at Northeastern. “I was very uncomfortable with the culture shock at times. But I think staying here, riding it out, pushing through it, and finding ways around or through the things that gave me problems showed me that I don’t have too much to be afraid of moving forward.”

But Burba said that over time, she pushed herself out of her comfort zone and made friends with expats and locals, introduced herself to her neighbors, and challenged her own preconceptions. “The inflated prices, the preconceptions of my presence in town, the calls of ‘mzungu,’ none of it was personal, but rather a reflection of the local culture and experience,” said Burba, who received a Presidential Global Scholarship from Northeastern to support her global co-op. “I usually coped by shifting my thoughts away from the experience itself and toward the lesson I could learn from it. I didn’t think less of immigrants in America before, but now I have a much greater appreciation for the work it takes to learn a new language and adjust to a different culture.”

Ultimately, Burba flourished in her co-op at Sikubora Limited, as well. The company provides a range of solar-powered home systems to help Tanzanians overcome the shortage of electricity in a country where the national grid provides power to 30 percent of the population. She enjoyed the experience so much that she extended her co-op by an extra month to finish up several projects and help two new Northeastern co-ops transition into their roles.

In her role as a software engineering co-op, Burba developed a system to track the complete inventory of the equipment the company has in stock, how old that equipment is, and who has used it. The system also includes a comprehensive database for customer payments records. “I realized this would be a major enhancement in tracking the cost of operations,” she said.

Jeff Hollister, the founder and managing partner of Sikubora, said Burba’s background in hardware and software engineering made her a great fit. “Our back-office system has been a huge project for her,” said Hollister, who graduated from Northeastern in 1980 with a business degree. “She’s done a spectacular job.”

Hollister founded Sikubora in 2013 after spending several years in Tanzania working for a non-governmental agency, during which time he recognized the need for sustainable energy to provide electricity. In recent years, as the cost of solar panels declined and mobile payment options for customers increased, Hollister saw an opportunity. Having solar power, Hollister said, is a “life-changing event” for Sikubora’s customers. “Having lights at the flip of a switch is a huge game-changer,” he said.

Sikubora provides a range of solar-powered home systems for Tanzanians. The base system includes four lights as well as a television, radio, flashlight, and phone charger. More premium systems include additional lights along with features such as fans, DVD players, subwoofers, and solar-powered irons. A crucial component, Hollister said, is that the company provides financing options of up to three years to help make the systems more affordable in a society where the average wage in the private sector was about $45 a month in 2011, according to the World Bank Group.

Burba’s role extended far beyond developing the inventory tracking system. Toward the end of her co-op, she oversaw a project to develop marketing materials for potential investors, which Hollister said was a critical initiative focused on helping the company grow. She also maintained the company’s website and mentored a local teenager who joined the Sikuboara team shortly after her co-op began and whose smartboard technology the company is integrating into its portfolio.

“This experience has shown me that I don’t have to be nervous about being daring and trying new things,” Burba said.