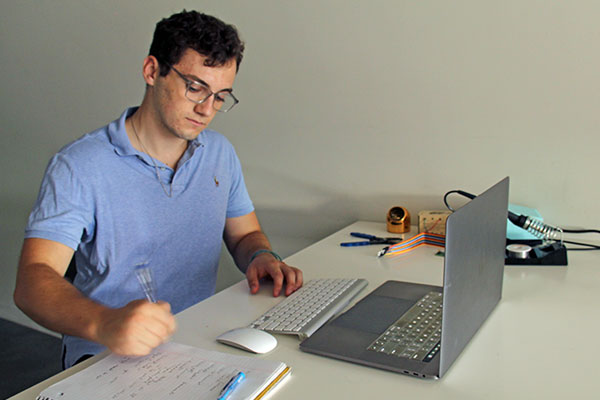 Saul Blain, E’23, in his own words, has taken on “a whole spectrum” of responsibilities at Avolta Energy, the Costa Rican solar energy firm where he is currently on co-op.

Blain, an electrical engineering major, knew he wanted to pursue a co-op in renewable energy after taking GE3300 with Assistant Professor Michael Kane. The third-year student was also intent on working in a Spanish speaking country. Blain targeted Costa Rica since the country was still open to tourism amid the pandemic and relies on almost entirely renewable energy sources to power its national grid. “I emailed like 20 to 30 companies,” Blain said. “I just really just using all resources everywhere until I got something back.” His search efforts paid off.

Based in a small apartment with a beautiful view overlooking San Jose, Blain has welcomed a variety of tasks at Avolta which have included “initial site visits, designing a solar system using software, evaluating the costs of the project, and continuously monitoring the system,” he said.

In addition to participating in the planning, installation, and business development, Blain is also working on his own projects. For example, he’s building a company-wide dashboard that will make it easier to keep up with project statuses. Moreover, he’s started blogging for Avolta.

“Blog posting is not something I expected to do, but it’s honestly been a huge surprise. I have been doing deep dives into different topics. And my boss…he suggested I write a blog post about solar and Bitcoin and the intersection of those. He wants to have some unique material out there,” Blain said. “And I’m enjoying doing the deep dives and compiling all this information and conveying it in a way that’s easier for customers to understand.”

In addition, it’s been interesting for Blain to work in the solar industry of a country whose finances are quite different from the U.S. “The tilt of your solar panel in the U.S. more or less matches up with your latitude.  When you’re investing in a solar system in the U.S., it’s 15 to 20 years until you return the initial investment. And here, it’s five to seven years. It’s a totally different conversation about getting people to invest in solar.” Blain said he hopes to carry this perspective with him when helping to develop renewable energy in the U.S.

It’s not only the work that has enamored Blain with Avolta and Costa Rica as a whole. “Everybody I’ve met at my company is genuinely interested in helping me learn about the process, but also really excited that I’m here and learning about their culture,” Blain said.

“They have a saying here, ‘Pura Vida,’ which just translates to pure life. And they say it for everything. It’s subtle, but you definitely feel it. People are just generally happy.”

When his co-op position at Avolta ends and he moves back to Boston, Blain said he knows that he wants to continue to work in renewable energy. “This is where I want to be working. There are a lot of cool people in this industry, a lot of exciting technology. And it’s growing. It’s really exploding.”

Related Story: He created his own global co-op during the pandemic