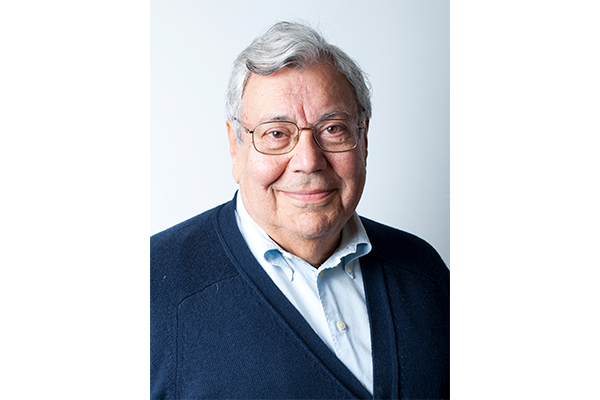 The late Emeritus Professor Philip Serafim had a long, distinguished career at Northeastern. He was a professor in the Department of Electrical and Computer Engineering for over 30 years and was highly respected for his outstanding contributions in teaching and research. His beloved wife, Leta Serafim, along with his colleagues and friends, have established the Professor Philip Serafim Fund for Recognizing Undergraduate Student Excellence in his memory. Once this endowed fund is activated, Professor Serafim’s legacy will live in perpetuity supporting a cause that was dear to his heart—developing the next generation of engineers.

President of Northeastern University Joseph E. Aoun, stated, “In addition to having a lasting impact on the teaching of electrical engineering at Northeastern, Professor Serafim was an important influence on many individual students. For this reason, it is particularly appropriate to commemorate him by supporting the university’s most outstanding electrical engineering majors. In this way, the fund bearing his name can continue to inspire new generations of undergraduates—just as he did throughout his career.”

Born in 1937, Professor Serafim grew up in Athens. He attended National Technical University in Greece, and upon graduation, received a Fulbright Scholarship and attended MIT, where he received his PhD with honors in electrical engineering in 1963.

His entire career was in academia. He started at Brooklyn Polytechnic in New York City and then at National Technical University in Greece, where he was elected full professor in 1978 and stayed until 1985. After returning to the United States, he joined Northeastern as a Professor in the Department of Electrical and Computer Engineering—a position he held for over 30 years. During his tenure on the faculty, he was affiliated with several research centers in the ECE department and his primary research areas were in electromagnetic propagation in random media, remote sensing, and nonlinear optics.

Professor Serafim was an outstanding teacher. He taught undergraduate and graduate courses in electromagnetics and highly populated circuits courses and consistently received the highest possible teaching evaluations from his students. He was an inspired lecturer and deeply committed to his students, following their progress as they made their way out into the world as engineers, both here and abroad.

“The Professor Philip Serafim Fund constitutes a fitting tribute to a remarkable teacher and a remarkable human being. Philip has a permanent place in the Northeastern story and this fund will enable our students to write its next chapter,” added President Aoun.

Professor Serafim’s contributions to the art of teaching and the science of engineering will live on through those who receive this scholarship. More information on the Professor Philip Serafim Fund for Recognizing Undergraduate Student Excellence can be found on the Giving website.