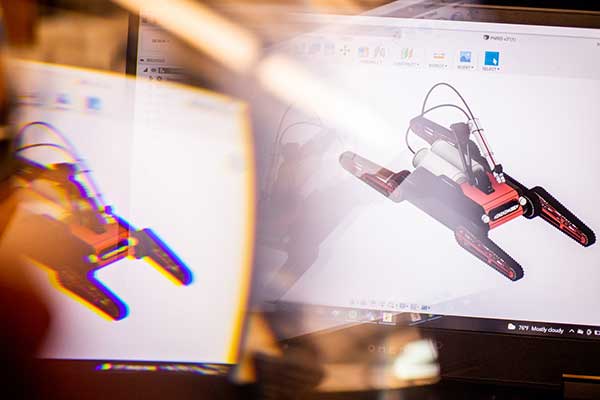 A Northeastern faculty and student team was awarded a $200K prize as a finalist for Phase 1 of the U.S. Department of Energy’s American-Made Challenges E-ROBOT Prize. In Phase 2, up to four teams (from the 10 finalists) will receive a $500K award. The team’s submission proposed development of a Precise Air-sealing Robot for Inaccessible Spaces (PARIS). Uninsulated, leaky attic crawlspaces are a major source of heat loss, contributing up to 15% of heating/cooling costs. However, retrofitting these spaces poses many challenges as they may be inaccessible, crowded with obstacles, and contain hazardous materials (e.g., vermiculite in existing insulation) and electrical hazards from wiring remnants. To address these challenges, PARIS is designed to traverse over ceiling joists, create a 3D feature map of existing conditions via sensor fusion, and seal identified gaps with spray foam sealant. The Northeastern team is advised by Associate Professor Taskin Padir, electrical and computer engineering (ECE), Assistant Professor Michael Kane, civil and environmental engineering, and College of Engineering Distinguished Professor Carey Rappaport, ECE, and also includes a post-doctoral associate, PhD students, undergraduate students, and a research engineer.

Can a robot seal air leaks to help this old (and cold) house?

Main photo: Northeastern received a $200,000 prize from the U.S. Department of Energy to create a proof of concept robot that will insulate hard-to-reach air leaks in homes. Photo by Matthew Modoono/Northeastern University

It’s every home renovation crew’s nightmare―crawling on one’s belly to squirt spray foam in the nooks and crannies of a claustrophobia-inducing attic.

What if it were possible to have a robot do the dirty work for them, lowering homeowners’ heating bills while saving time, money, and energy? Northeastern just won $200,000 from the U.S. Energy Department to build a prototype robot that could squeeze into tight spaces to retrofit the chilly attics in thousands of old homes.

“Robots can safely enter small spaces and cavities, such as ductwork, to perform air-sealing or other efficiency activities,” the department says in launching the E-ROBOT prize, a $5 million challenge to demonstrate the promise of advanced robotics for energy-efficiency tasks.

“There aren’t enough technologies out in the field for this kind of work,” says Taskin Padir, associate professor of electrical and computer engineering and director of Northeastern’s Institute for Experiential Robotics, where the focus is on robots that complement humans.

He says the three-story homes commonly known as “triple deckers” in Massachusetts are a prime example of generations-old residential buildings where environmental retrofit projects are made all the more difficult because of joists and rafters in narrow spaces. “Even a simple task like filling an air leak in the attic becomes a challenge,” Padir adds.

Air sealing is important, the Energy Department says, not only because drafts are uncomfortable, but also because air leaks carry both moisture and energy. For example, air leaks can carry hot, humid outdoor air into the house in the summer, or can carry warm, moist air from a bathroom into the attic in the winter.

Insulation crews often have to work in confined spaces to plug up leaks in older buildings. Thus, the Energy Department’s challenge was born.

E-ROBOT, or Envelope Retrofit Opportunities for Building Optimization Technologies, is a fast-track effort to identify automation to meet the building industry’s needs. Northeastern was among 10 universities and robotics companies that made it past the first round of the two-phase contest.

The university will use the $200,000 to build a prototype that addresses three challenges, Padir says.

“Can this robot really get into a tight attic space or a crawl space where humans are having a hard time accessing? Can this robot look around and build a map of that space? And can it handle tasks that are simple for humans but not that simple for robots, such as applying spray foam to close up the leak?”

Kane, the team’s co-captain, adds that innovation is needed in this particular field because there were no standards when some buildings were built as much as 100 years ago. A fully autonomous robot, therefore, probably wouldn’t be able to navigate the terrain on its own.

“That’s why our approach is to have human-robot interaction be a critical component of the project,” Kane says.