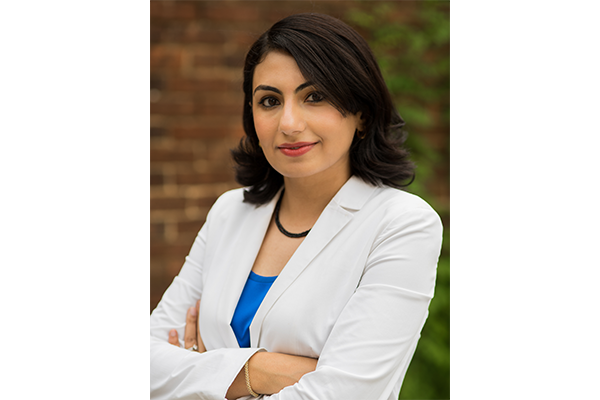 Ostadabbas has been collaborating with researchers at Northeastern’s Bouvé College of Health Sciences and the University of Maine in this area for a while. Using her expertise in pattern recognition and advanced AI, she creates algorithms that can search for and identify body poses/postures, facial expressions, and pacifier use behavior, already found to be linked to infant motor/oral functions and subsequent developmental disruptions.

Now, Ostadabbas is setting her sights on developing a targeted, AI-guided infant motor function monitoring and assessment system, that can discover the relationship between certain infant behavior and future diagnoses of autism spectrum disorder (ASD), which affects communication and behavior in up to 1.5 percent of the population.

Ostadabbas will collect baby monitor videos from study participants in order to examine the infants’ motor behavior in their natural environments in an unobtrusive way. Then, she will establish a series of computer vision-based algorithms to identify body and facial poses that can predict the presence of neurodivergent behaviors later in life.

“Examining infants’ face and body poses allows us to pick up signs of motor disruption and could lead to novel algorithmic screening or even discovery of prodromal (or pre-symptomatic) risk markers,” says Ostadabbas. “By using computer vision, we can quickly and automatically process the large amount of data from the videos, instead of watching and examining the videos manually.”

For this study, Ostadabbas will be collaborating with the Puerto Rico Testsite for Exploring Contamination Threats (PROTECT) research center to establish a cohort of approximately 300 infants in Puerto Rico. This five-year project will measure the infants’ early motor function between the ages of 5–10 months, and then compare that data to the results of standardized ASD risk screening tests performed at 18 and 24 months of age.

“At the moment, the average age of ASD diagnosis is four years,” says Ostadabbas. “By detecting this kind of neurodevelopmental condition in younger children, we can introduce interventions sooner and possibly impact outcomes in a positive way.”

Ostadabbas’ study is unique in the way it approaches the data looking ahead toward the future. Past studies in the 1980s and 2000s that examined body symmetry as a sign of developmental progress were retrospective, in that once children received a diagnosis of ASD, practitioners look back at data collected in the past to look for correlation.

“We will be the first to start with data and see what happens,” says Ostadabbas. “The Puerto Rican population also has a higher rate in ASD diagnoses, which increase the probability that we’ll see examples of what we’re looking for in the data.”

Ostadabbas is also excited about the opportunity this work has to ameliorate a critical public health research gap by gathering data from historically underrepresented and low-income populations.

In addition to the potential societal impact of the research itself, Ostadabbas and her partners will engage students from high school to graduate school through educational activities, creating a pipeline of future data scientists and engineers that democratizes access to broader communities.