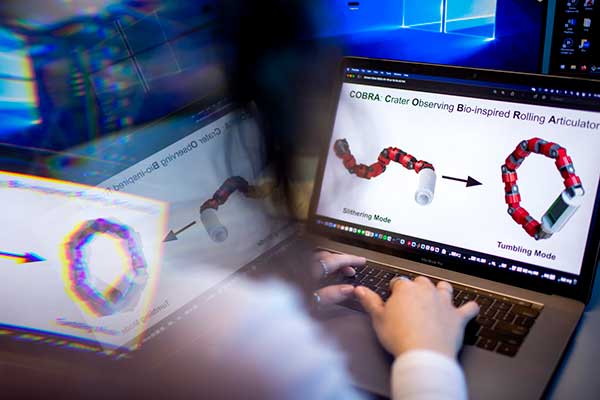 A Northeastern University student team, Students for the Exploration and Development of Space, advised by Assistant Professor Alireza Ramezani, electrical and computer engineering, was one of seven university teams selected as finalists in the 2022 NASA’s BIG Idea Challenge. The team’s project, titled “COBRA: Crater Observing Bio-inspired Rolling Articulator,” received $174K in funds to further develop and test the technologies over the next 10 months. COBRA is a snake-like design for their robot which will allow it to traverse the extreme terrains on the moon’s surface.

This slithering shape-shifter searches for water on the moon

Northeastern students in the Exploration and Development of Space club design a snake robot in the ISEC building on March 4, 2022. Northeastern received a grant from NASA to fund the manufacturing of the snake robot to explore the Moon. Photo by Matthew Modoono/Northeastern University

The ouroboros—the ancient symbol of a snake swallowing its own tail—generally represents infinity and the natural, endless cycles of the universe.

But for members of Northeastern’s Students for the Exploration and Development of Space club, the ouroboros-like design of their moon-destined robot is merely practical—the robot can slither like a desert snake across the loose soil of the moon and, when needed, connect head-to-tail to form a wheel that can tumble down the steep slopes of the moon’s craters. Any metaphors for the unity of the solar system or the orbit of the moon around the Earth are happy coincidences.

The student-led team of 13 undergraduates recently won an award from NASA’s BIG Idea Challenge to further develop its design, which fulfilled this year’s competition requirements for robots that can traverse extreme terrains, such as the enormous craters on the moon’s south pole. Their design, “COBRA: Crater Observing Bio-inspired Rolling Articulator,” is a snake-inspired multimodal rover that combines tumbling and slithering locomotion. Its mission is to explore Shackleton Crater and provide ground truth measurements of water ice concentration throughout the crater. The rover utilizes slithering locomotion to traverse porous regolith and tumbling to efficiently travel large distances on the steep crater slope by leveraging lunar gravity. COBRA is robust on uneven terrain and consists of lightweight, customizable modules.

View the Northeastern Team’s Video Submission, and view summaries of all finalist teams.

The team will present the results of their testing to a panel of NASA and industry subject matter experts in November 2022 and team awards will be presented.

“We want to explore the Shackleton crater, which is massive—20 kilometers in diameter—because it might contain water,” says Matt Schroeter, the undergraduate bioengineering student who is leading the team. “But if you want to send a robot into that crater, it needs to be really energy efficient because there’s no sunlight, no potential for solar energy.”

Northeastern students in the Exploration and Development of Space club design a snake robot in the ISEC building on March 4, 2022. Northeastern received a grant from NASA to fund the manufacturing of the snake robot to explore the Moon. Photos by Matthew Modoono/Northeastern University

The tumbling-wheel design allows gravity to do most of the work on the way down to the base of the crater, saving most of the robot’s energy for the journey back. Once the robot is on level ground, it can unwind itself and resume slithering through the soil in search of water.

Alireza Ramezani, assistant professor of electrical and computer engineering at Northeastern, is the lead principal investigator of this project and supervises the team. He led the Big Idea team in 2020 with the idea of using bio-inspired, legged robots for exploring permanently shadowed regions of the moon. For this project, the team is exploring a new form of mobility—bio-inspired robot locomotion systems—that Ramezani believes will transform future NASA space explorations.

The moon’s south pole is largely unexplored because of its harsh conditions and perpetual darkness, but some astronomers speculate that water could be trapped in those deep craters, which formed when asteroids—potentially bearing water—hit the moon. That water, if found, could be used to create rocket fuel, making the moon a pit stop on the way to far-off planets.

Schroeter believes the club’s robot is unique because of the shape-shifting component. “People have already made snake robots and tumbling robots, but the novel thing about ours is that when we connect the head and the tail, we have the ability to form the body however we want,” he says. The shape of the wheel can be adjusted as needed to match the terrain.

For example, if someone pushed a lone bike tire down a hill, it would likely fall over if it hit even the smallest pebble. To avoid this problem with their robot, the team has developed a technique to change the center of mass in the robot in real time to prevent it from falling over, Schroeter explains.

“If the robot starts falling to the right, we can shift the joints on the left to keep it upright,” he says.

As of now, most rovers used in moon exploration only can traverse slopes with about 30 degrees of steepness. “But a lot of the crater walls are steeper than that,” Schroeter says. Because of the team’s agile design, Schroeter believes COBRA can overcome this problem and manage more daunting terrain.

COBRA is still in the design phase. But thanks to the award from NASA, Schroeter says the team can begin making plans to manufacture a prototype, which will be 3D printed and tested at Northeastern.