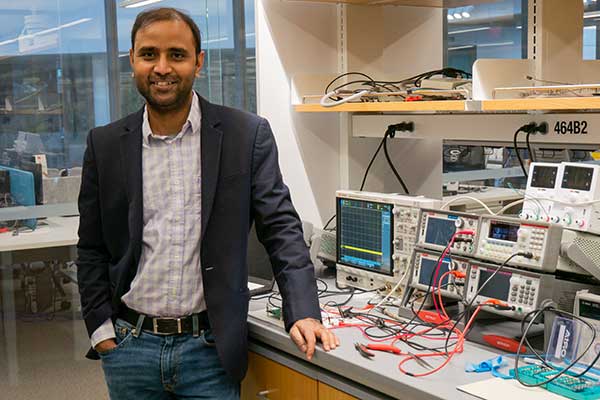 Can a technology that’s been forgotten for a half-century improve medical care?

There’s a bit of “Back to the Future” in the work of Aatmesh Shrivastava, an assistant professor of electrical and computer engineering at Northeastern University. To make a quantum leap in the development of new medical devices, he’s looking back to a computer technology that has been abandoned for half a century.

That’s why Shrivastava is using analog computing to reduce the size of implantable and wearable medical devices while simultaneously expanding their computing power. His goal is to make it possible for ultra-tiny devices to utilize machine learning to constantly improve their diagnostic capabilities, thus saving lives through timely medical interventions. 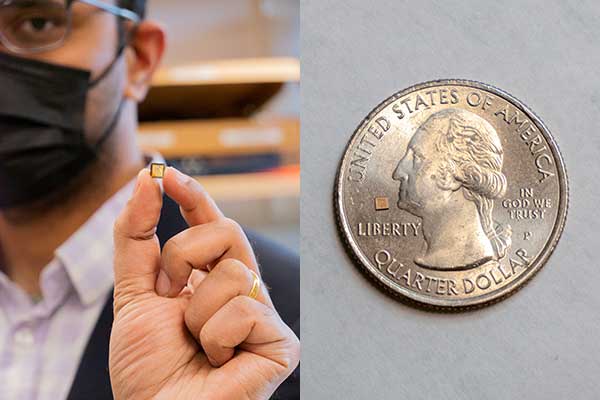 Aatmesh Shrivastava, assistant professor of electrical and computer engineering, is developing ultra-low power (ULP) machine learning (ML) system-on-chip (SoC) hardware with inference capability for wearable and implantable biomedical applications. Using analog rather than digital computing, the chip will be 5 to 10 times smaller (millimeters vs. centimeter in size) and use 5 to 50 times less power. Photos by Bella Martinez, Northeastern College of Engineering.

Shrivastava recently won a five-year, $500,000 CAREER Award from the National Science Foundation that will finance the development of this cutting-edge technology.

“These innovations will improve the quality of life for many patients who currently have to be in the hospital for a very long time so they can be monitored continuously,” says Shrivastava. “This includes people who suffer from seizures, heart arrhythmia, and a variety of neurological disorders.”

Instead of being hooked up to monitoring machines in the hospital, patients will be able to resume their normal life while being monitored by sophisticated implants. This development will also help reduce the cost of healthcare by contributing to the movement toward home-based healthcare.

Among the many uses for his new computing platform are monitoring devices for seizures (electroencephalograms), prosthetic devices (electromyograms), obstructive sleep apnea and COVID-19 (pulse oximeters), and arrhythmia associated with strokes and heart attacks (electrocardiograms),

Based on his technological advances, he will also create new courses at Northeastern for both graduate and undergraduate students.

The limitations of digital

Digital computer chips are too big and consume far too much energy for the types of mobile monitoring devices Shrivastava envisions. The issue is that digital processors have to convert the analog signals of the real world into the ones and zeros of the digital world. This means that the transistors within the chips have only two options—on or off—which severely limits the computing power of each chip.

“So when we turned to digital, we made our transistors dumb,” says Shrivastava. “They call what we use now microchips, but they are about a centimeter in size, which isn’t that small. In comparison, an analog chip will be measured in millimeters. They will be 5 to 10 times smaller and use 5 to 50 times less power.”

So what happened to analog computing and why is it back?

The move to analog

“Analog computing has always been better than digital,” says Shrivastava, noting that the very first computers were all analog. “But in the 1970s and 80s the entire industry shifted to digital for a variety of reasons.”

Digital computers were far simpler to design and easier to program. They were also more reliable than their temperamental analog cousins, a problem that plagues analog computing to this day.

“In the 1970s, it was clear who was going to win this battle, so everyone moved to digital. Now everyone knows that digital has reached the limits of its computing capacity and we are beginning to look at analog again.”

According to Shrivastava’s calculations, three analog transistors have the computing power of 896 digital transistors

Power consumption is another issue for the types of innovations Shrivastava hopes to make.

“Most of our electronics such as cellphones and laptops rely on relatively big batteries,” he says. “But that won’t work for implantable chips.”

That’s why Shrivastava is designing circuits that can run almost entirely on harvested energy—power that resides in the environment such as light, motion, heat, and radio frequency signals.

In addition to the mini-circuits, Shrivastava says the computing power of analogy chips is needed to create the simulated biological systems needed to explore the causes and cures of a variety of diseases.

“The computing limitations of digital limit its usefulness in advanced biomedicine,” he says.

“Finding the characteristics of diseases requires far more computing capacity and much lower power demands that digital computers can provide.”