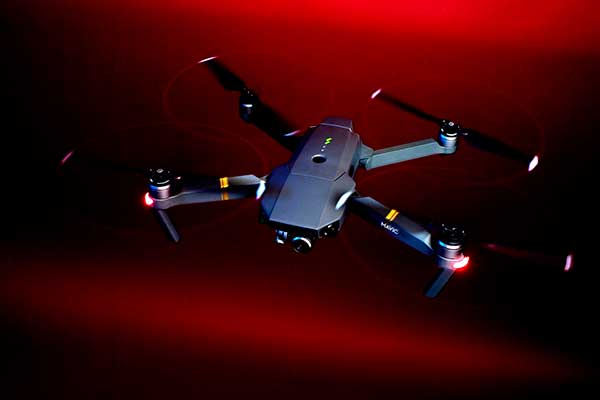 ECE Professor Matteo Rinaldi, who is director of the Northeastern SMART Center and the Kostas Nanotechnology Lab, has been awarded a $2.1 million grant from the Department of Energy Advanced Research Projects Agency-Energy (ARPA-E) for “High-Performance and Miniaturized Greenhouse Gas Sensor for Drone-based Remote Sensing.” The grant is part of the OPEN 2021 program, which prioritizes funding high-impact, high-risk technologies that support novel approaches to clean energy challenges. Rinaldi’s project is among just 68 nationwide selected for funding.

A sensor that sniffs laughing gas? Here’s why it’s no joke.

Main photo: Northeastern won $2.1 million in federal funding to develop a lightweight sensor that can be mounted on a drone and used by farmers to detect harmful nitrous oxide emissions on their land. Photo by Matthew Modoono/Northeastern University

Nitrous oxide—commonly known as laughing gas and used to sedate surgical patients—is a key ingredient in agricultural fertilizer. The colorless greenhouse gas is also 300 times more harmful to the environment than carbon dioxide, according to the U.S. government.

That poses a threat to the White House’s ambitions to achieve net-zero emissions by 2050. Which is why the Energy Department is funding $175 million worth of projects to help universities and private-sector companies develop novel technologies that address pressing environmental challenges, including accurately monitoring nitrous-oxide levels on farms. Current nitrous oxide sensors on farm towers are ‘big and power-hungry,’ says electrical and computer engineering professor Matteo Rinaldi. ‘So if you put them on top of a drone, it won’t be able to fly long enough to cover the entire field.’ Photo by Matthew Modoono/Northeastern University

“Universities, companies, and our national labs are doubling down on advancing clean energy technology innovation and manufacturing in America to deliver critical energy solutions from renewables to electric vehicles to fusion energy to tackle the climate crisis,” Secretary of Energy Jennifer Granholm said in a press release announcing the monetary awards.

Northeastern will receive $2.1 million to make a palm-sized sensor that can be affixed to drones to scan acres of land faster, cheaper, and more accurately than the present shoebox-sized sensors found on stationary towers.

“They are expensive, they don’t scale, and they cannot provide a large area of coverage,” Northeastern electrical and computer engineering professor Matteo Rinaldi says of the towers. As the director of the university’s SMART Center for innovative research, Rinaldi says Northeastern is well suited to vastly improve upon the tower-installed sensors.

The current sensors “are big and power-hungry,” he says, “so if you put them on top of a drone, it won’t be able to fly long enough to cover the entire field.”

Engineering a small sensor that is light enough to fly but not so expensive that it eats into farmers’ profits is no small feat.

“That’s really the main challenge,” Rinaldi says, “and that’s what our proposal aims to do—build a new nitrous-oxide sensor that is an order of magnitude smaller in size, weight, and power.”

The proposed system will improve drone flight time by 50% and provide the kind of resolution required to monitor hot spots of nitrous oxide that may crop up. “Our sensor can take 10 measurements per second, which directly translates into much finer coverage,” Rinaldi says.

Armed with the data, farmers can either improve soil management to reduce emissions if they are high, or they can claim carbon credit or some other forms of rewards if emissions are low. The highly reliable measurements from the sensors will provide sufficient confidence to carbon markets, allowing for producers to be properly compensated for their improved carbon management practices, says Rinaldi.

“The technology we are proposing would be critical for the implementation of a carbon economy,” he says.

Here’s how he and his team plan to do it. First, they are partnering with a Northeastern startup, Zepsor Technologies, founded by Rinaldi and a former student, that will take care of most of the technology requirements. The sensors will be built on the Boston campus.

Second, they are leveraging existing know-how in smart farming technologies. The Northeastern team has received previous funding from the Energy Department as well as the Bill and Melinda Gates Foundation to develop low-power sensors for such tasks as monitoring the water content of plants and detecting pests that could harm crops.

“Our team is number one in the country, if not in the world, for these low-power or zero-power types of sensors,” Rinaldi says. “We really pioneered this area of research and we are known worldwide for these advancements.”