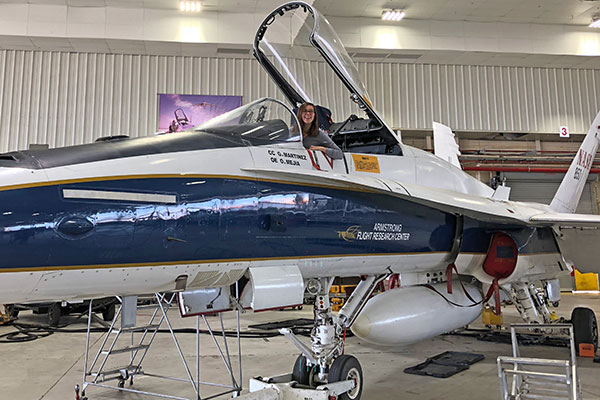 Northeastern alumna and current Stanford University PhD student Elizabeth Wig’s journey is a testament to the unlimited opportunities for growth and self-betterment during one’s time in the world of higher education.

Wig, who received both her master’s and bachelor’s in electrical engineering in 2020, didn’t wait long to get involved and make the most of her time on Huntington Ave. after arriving on campus.

Working for Northeastern’s Awareness and Localization of Explosive Related Threats (ALERT) Center as an undergraduate research assistant from 2016 until her departure in August 2020, Wig eventually was able to have a paper published at the European Conference on Antennas and Propagation in 2017 with College of Engineering Distinguished Professor Carey Rappaport and student Mahdiar Sadeghi.

Conducting research on mathematical models for millimeter-wave security scanning in collaboration with Smiths Detection and the Pacific Northwest National Laboratory, Wig became involved with the ALERT center so early on in her undergraduate career after learning about Rappaport’s research while riding a chairlift up a mountain at a Northeastern-sponsored ski event.

“I loved the way relatively few equations could describe so much of what makes up our world, from why sunrises are so beautiful to the way molecules hold together to Wi-Fi,” Wig said after receiving the ALERT scholarship in 2017.

Eventually, this helped propel Wig to her first co-op in Spring 2017 as an electrical engineer at Draper Laboratories working under their Sensors and Imaging Systems group within the Position, Navigation and Timing divisions.

Wig’s accomplishments through just the first two years of her time at Northeastern would be impressive enough on their own—earning the Society of Women Engineers GE Women’s Network Scholarship as well as presenting on her work with Sadeghi at the ADSA15 (Advanced Development for Security Applications) Workshop in November 2016.

After gaining industry-wide recognition through just her sophomore year, Wig eventually landed at NASA in California for her second co-op working with both the Armstrong Flight Research Center and the Jet Propulsion Laboratory, which she had laid out as a primary career goal as far back as September 2017 after receiving the ALERT Center scholarship.

In 2018, Wig was able to attend IEEE’s 2018 Boston conference on antennas and propagation, her first first-author paper presentation thanks to the Honors Conference Travel Fund which allowed her to return to Boston from California for the event.

During her time at NASA—a dream culminated into reality—Wig worked on integrating ADS-B into supersonic aircraft with an eye towards commercial supersonic flights and better-tracked, safer flights for spacecraft. She also researched a potential new method for detecting water underground on Mars using nuclear magnetic resonance, the same technology used in MRI machines. 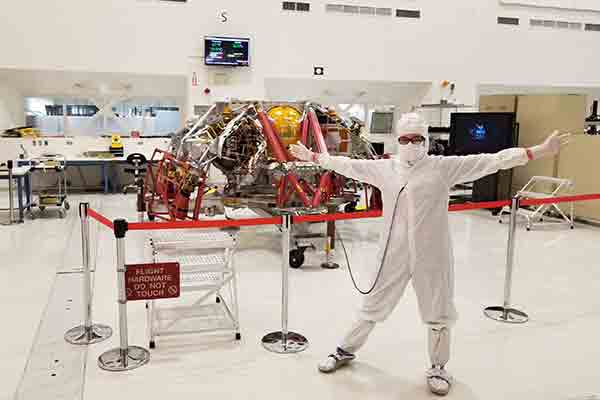 Wig says, “My co-op experience was an incredible opportunity! I worked with the F-18 supersonic aircraft. My project involved equipping these supersonic planes with ADS-B, a way for aircraft to communicate their GPS position and velocity data to each other for air traffic control purposes. While these systems are common on commercial aircraft, this was the first time they had been installed on an airplane going faster than sound. It was really exciting to see the how NASA does so much groundbreaking work from the inside and to talk to a variety of people whose work makes advanced aeronautics and space exploration possible, from the human factors team researching how to keep people alive and comfortable in extreme conditions, to the scientist who designed gliders based on the wings of an albatross and discovered why birds don’t need wingtips. And I loved being able to play even a small role in the work going on there.”

To tell of Wig’s accomplishments at Northeastern would be imbalanced without focusing on her community involvement and personal experiences as well; her professional progress didn’t hinder her experience in the slightest. 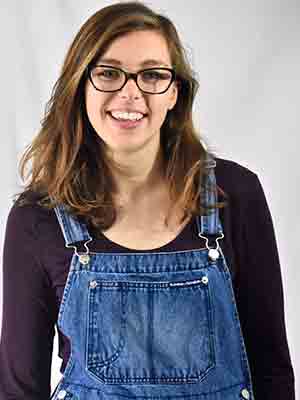 Wig also managed to use her time at Northeastern as a springboard for seeing the world she so often tries to further her understanding of through her work. She led an Alternative Spring Break to Utah, allowing participants “to learn about public lands and the intersection of commercial, recreational, ecological and cultural land use…” as she describes.

Her Dialogues of Civilization were of a particular importance to Wig’s experience, traveling to India to study climate change science and policy and Italy to study engineering and literature. In Italy, Wig pointed to the Bienale in Venice, an art exhibition, as one of her most impactful experiences in realizing the wide range of disciplines that go into art production.

Wig’s time at Northeastern was capped by an abundance of awards and recognitions, receiving both the National Science Foundation (NSF) Graduate Research Fellowship and the National Defense Science and Engineering Graduate (NDSEG) Fellowship in 2020 as well as the prestigious Barry Goldwater Scholarship in 2018.

Balancing her own professional, personal and intellectual growth during her time at Northeastern has paid off for Wig and will continue to do so at Stanford University, where she is the recipient of the Stanford Graduate Fellowship, generally awarded to science and engineering students—knocking off another two of her goals to pursue her PhD and conduct research in an academic or professional setting.