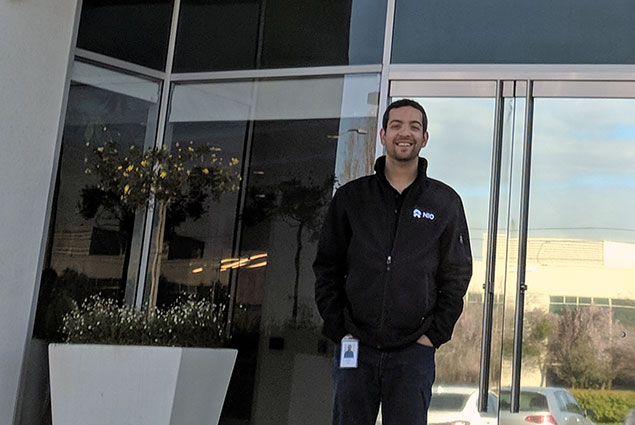 While pursuing his bachelor’s degree in computer engineering, each of his three co-op positions guided his career journey. At his first co-op, at iRobot, Rufo said, “I worked on robot vacuum cleaners. That’s where I got super into robotics, and perception and navigation. The cool part about iRobot is that their stuff is in consumers’ hands, so you can say, ‘I worked on that thing you have in your house right now.’”

For his second co-op, Rufo joined QinetiQ, a company that makes bomb disarming robots for several U.S. government agencies. Then, he thought, “Why don’t I do something that’s a little more research-y, a little more out there and different?” So, for his third co-op, Rufo took a position in the active optics group at MIT Lincoln Labs. Here he got experience with all kinds of imaging, including laser radar. He enjoyed this position so much that he stayed for almost four years after graduation, working mostly on LIDAR (light detection and ranging), which is a type of radar that utilizes lasers.

While at Lincoln Labs, Rufo returned to Northeastern to earn his Master of Science in electrical and computer engineering under the guidance of Professor Hanumant Singh, who he says, “pushed me to think outside of an individual sensor or system, to think about the big picture, and consider autonomy as a whole.” Rufo combined his experiences with both LIDAR and robotics into his thesis, entitled, “Progress Towards LIDAR Based Bicycle Detection in Urban Environments.” He hopes to further autonomy research by sharing the data sets he collected throughout his thesis with the general public. The project opened his eyes to just how much work remains before autonomous vehicles become a reality, and Rufo intends to contribute to the solutions.

With significant expertise in LIDAR, Rufo was a top pick for a senior LIDAR engineer position at NIO USA Inc. “My job today is to help the company in integrating laser radar into their autonomous vehicles,” he said. I’m working on inventing technology that’ll be out in next generation vehicles.”

As the team’s “LIDAR expert,” as he termed it, he’s at the forefront of research and development into using laser radar systems to allow cars to navigate and steer themselves. “My ambition is to carry this to higher levels of autonomy where cars can drive in all weather conditions and all driving scenarios,” he said. “I want to push this technology to its limit, and also make it available to consumers.”