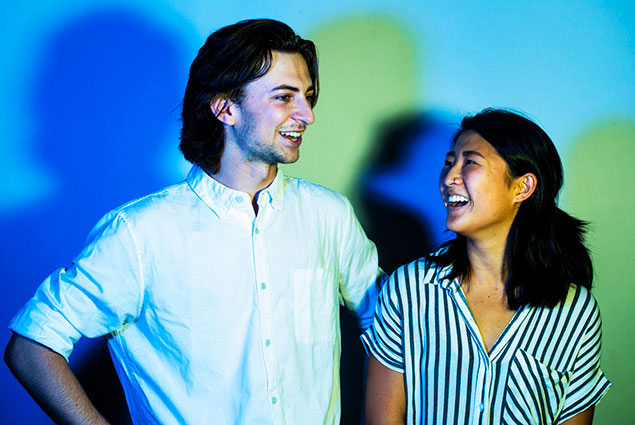 Alisa Jin, BS Electrical and Computer Engineering, helped to build a drone that flies like a kite. Alex Dye, BS Mechanical Engineering 2020, helped to design the prototype of a robot that injects medicine into the eyes of patients with severe vision problems.

They are both Northeastern students, and they say that working on co-op at high-tech startups in Switzerland this past spring has inspired them to launch their own companies.

“Before this co-op, I had made it my goal to launch a venture one day,” said Dye, who worked at a company called Ophthorobotics. “This experience strengthened my resolve to work toward this goal, as I saw just how much of an impact a small team with a common vision can have on an industry.”

Jin, who worked at a company called Fotokite, echoed Dye. “I just really love the team atmosphere and being more involved on all sides,” she said. “I think someday I would like to start my own company.”

Jin and Dye said Switzerland was the perfect place to figure out what they want to do after they graduate from Northeastern.

The European nation is the most innovative country in the world, according to the Global Innovation Index, a yearly ranking produced by Cornell University, the World Intellectual Property Organization, and INSEAD, a business school in France.

The 2018 report said that Switzerland is among the world’s leaders in producing patents, spending money on research and development, and forming business partnerships between universities and corporations.

Jin and Dye credited Zurich’s “culture of innovation” and the success of their co-op employers to the international makeup of their teams.

“We both work in international teams so we get to learn from different perspectives,” said Jin. “When you have coworkers from Germany and Russia, you each bring something different to the table, which leads to a better product.”

Jin created a sensor that calculated the torque and force of Fotokite’s new drone, which is tethered to a power source on the ground that enables it to fly nonstop. This technology, she said, could be used to help firefighters battle large blazes that rage for prolonged periods of time.

“You’re in the nitty gritty of everything,” said Jin. “At a startup you can see exactly where your efforts are going. When I saw that drone fly, I knew I had done my job properly.”

Dye said he used what he learned in Northeastern’s Robotics Club to build the prototype of a robot that will be used to inject medication into the eyes of patients with age-related macular degeneration, the leading cause of blindness in the industrialized world. He said the automated injections will be safer, faster, and more reliable than if they were to be administered by a doctor.

“Sometimes it was a lot of pressure having that level of responsibility,” sad Dye, who was one of only three members of the Ophthorobotics team. “But ultimately, it’s more rewarding and you feel like you made a measurable difference.”

He added: “I got the sense that people working there saw no limits on what they could achieve through technology. Working in such an innovative environment gave me a greater sense of purpose at work.”