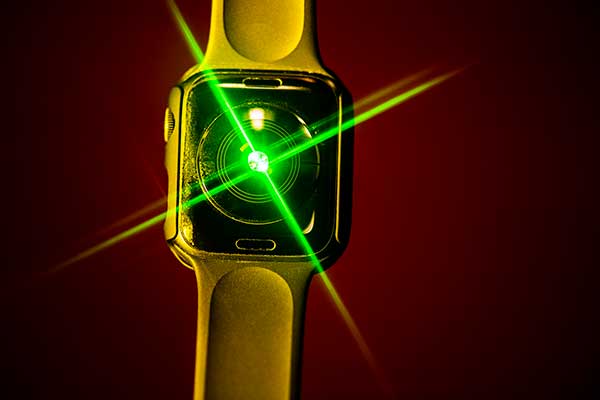 Ditch the bulky fitness tracker. Wearable tech is getting an upgrade.

Wearable technology is everywhere. If you look around your office or classroom, family gathering or workout class, someone is probably wearing a smartwatch, a fitness tracker, or some other electronic device that can detect, monitor, and analyze signals from their body.

Activity trackers are particularly popular, and “wearables” also can be important tools for monitoring someone’s health, tracking metrics such as heart rate and blood oxygen level.

But they face a limitation. Most wearables are made of sensors embedded into hard plastic.

“It’s rigid, it’s uncomfortable. Nobody wants to walk around with rigid things attached to their body, right?” says Canek Fuentes-Hernandez, an associate professor of electrical and computer engineering at Northeastern. “It’s not very wearable.” That stiffness has been a limitation on how wearables could be deployed, Fuentes-Hernandez says. But he may have created a solution: A soft material that can stretch and flex like (and with) a user’s skin.

“Materials like the one that we developed could potentially lead to sensors that could just be attached to the skin, and the wearer of these sensors wouldn’t even notice their presence, because they just behave like the skin,” Fuentes-Hernandez says.

Not only could this second-skin-like material offer more comfort to a user, it also could help solve another problem with wearables: power. Devices that are constantly monitoring bodily functions can drain power quickly, Fuentes-Hernandez says. And, if their purpose is to continually monitor something, a device that needs to be taken off and charged frequently is less useful.

The material Fuentes-Hernandez and his colleagues developed is a semiconductor that can be used in devices that use light to measure signals from the body. The team figured out how to make it in such a way that requires less power to achieve the same performance. The trick, Fuentes-Hernandez says, is to pattern the photodetector as a ring with a light source in the middle. That, he says, allows you to capture the signal without consuming as much power.

“If we can reduce the power consumed by an order of magnitude, now rather than being able to wear this for a few hours, that means I can wear this for a week,” Fuentes-Hernandez says. “And that has tremendous consequences on our ability to monitor continuously some biometric signals that are of importance.”

Take a pulse oximeter, for example. That is the small plastic device that your doctor clips onto a fingertip to measure the oxygen saturation of blood. It yields critical data about how well lungs are functioning, and about heart health.

Perhaps, if someone could put several sensors distributed over their body and leave them for longer than the clip-on version, they could use them to measure and monitor blood pressure, Fuentes-Hernandez says. That could help doctors catch and treat severe heart problems faster.

This project was done by Fuentes-Hernandez and colleagues at Georgia Institute of Technology, where he was a principal research scientist at the Center for Organic Photonics and Electronics and the School of Electrical and Computer Engineering before joining Northeastern in August 2021. The material is described in a paper published last month in the journal Science Advances. Fuentes-Hernandez plans to continue developing this material in his laboratory at Northeastern.

He plans to focus first on the medical applications of this material. He aims to demonstrate how this material can be used to develop soft, stretchable, ergonomic pulse oximeters.

But the applications could go beyond the medical realm, he says. “The fact that you have something that can deform its shape without breaking, that can have a lot of implications regarding where you can deploy sensors,” he says. “I’m interested in deploying sensors, for instance, for smart agriculture.”

A material that can move with human skin also could potentially move with a growing plant or fruit, he says. A sensor that could grow with the fruit could monitor its color or other indicators to know when it’s ripe, for example.

“It’s a technology that can sit at the surface of a biological entity,” Fuentes-Hernandez says, and that could open up a world of possibilities.