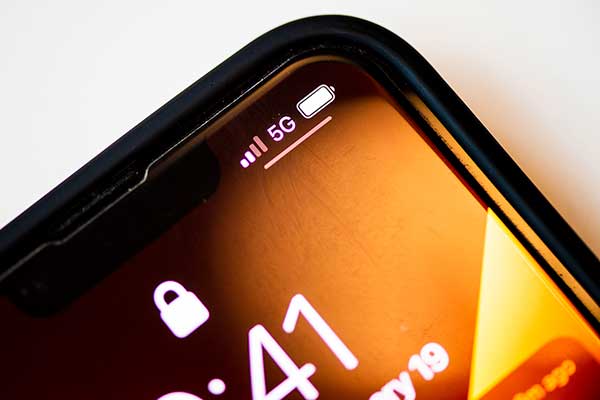 Is 5G really a threat to air travel?

Main photo: The emergence of 5G service near U.S. airports has led to the cancellation of flights by international carriers. Photo by Alyssa Stone/Northeastern University

The U.S. rollout of improved wireless 5G networks is creating a crisis for the airline industry. Air carriers around the world have canceled or adjusted flights in reaction to the upgraded cellular services near U.S. airports that may interfere with radar systems.

“It’s an interagency problem more than a technical one,” says Tommaso Melodia, the William Lincoln Smith Chair Professor of Electrical and Computer Engineering at Northeastern.

AT&T and Verizon have upgraded their 5G service with radio frequencies that enable greater range at faster speeds. But those frequencies may conflict with altimeters, the instruments that allow planes to land in bad weather.

The Federal Aviation Administration identified 50 U.S. airports that were vulnerable to the enhanced 5G communications. AT&T and Verizon agreed to delay activation of enhanced 5G service near some U.S. airports—but the action didn’t prevent the disruption of flight schedules by Emirates, Japan Airlines, Lufthansa, and other carriers outside the U.S. Tommaso Melodia, director of the Institute for the Wireless Internet of Things and the William Lincoln Smith Chair Professor of Electrical and Computer Engineering at Northeastern. Photo by Matthew Modoono/Northeastern University

“The last-minute postponement happened too late to stop the crews being sent out for today’s flight. It just made it a nightmare,” a pilot with a major European airline told Reuters on Wednesday.

The 5G (fifth generation) systems that are widely available in densely populated American cities deliver good connectivity, but slower speeds. The upgraded service that AT&T and Verizon are rolling out promises greater connectivity that is more energy-efficient at data speeds at least 50 times faster than current 4G networks. (On mobile devices, the enhanced network is denoted as 5G+ on AT&T, and 5G UW—for “ultra wideband”—on Verizon.)

U.S. cellular companies have been investing in the technology for years—so why were the conflicts with airline altimeters not addressed earlier?

Melodia, who directs Northeastern’s Institute for the Wireless Internet of Things and is director of research for the Platforms for Advanced Wireless Research, spoke with News@Northeastern about the issues at airports as well as the benefits of 5G. His comments have been edited for brevity and clarity.

Q1. What is the backstory of this problem?

There was an auction in 2020 for a significant chunk of 5G spectrum in the so-called “C band,” between 3.7 and 3.98 gigahertz. That is a portion of the electromagnetic spectrum that was not used for cellular communications before 5G. The Federal Communication Commission (FCC) was doing studies in the past few years to determine whether they could use the C band for 5G, and they concluded that they could.

Various companies bid $80 billion to the FCC to acquire licenses to use that portion of the spectrum. AT&T and Verizon bought a good part of this spectrum, and now they want to deploy their 5G network in the C band, which is precious real estate for them.

In a technically ideal world, there would be no problem. You have different frequency bands. It’s like, 5G operates in its lane. There are a few lanes in between that are empty to avoid spills. And then the aviation altimeters operate in a different lane. Everything is separated, everything is nice—except some of these old altimeters were not designed with the specs that are required today to make sure that they don’t get any interference from 5G.

The old altimeters are using a larger portion of the spectrum than they should. It’s no one’s fault. They were designed that way because, at the time, there was no 5G to be aware of.

Q2. Why were these problems not resolved months or years ago?

They should have been. The FCC regulates commercial use of the spectrum for communications. The FAA regulates flight safety. The agencies should have worked together to find a common and shared truth—is the interference of altimeters real, or is it a theoretical problem?—and a path forward. AT&T and Verizon have invested a lot of money to get that spectrum, and they want to be able to use it. At the same time, you can’t jeopardize safety. But the issue at hand affects an older generation of altimeters, which could be upgraded and replaced.

This is an important policy that should have been figured out within the government, not through the media. And instead, it has become a media war.

Q3. How many of the old altimeters are in use?

Finding that out would be the first step.

The portion of the C band that has been auctioned for 5G is 3.7 GHz to 3.98 GHz. That is a portion of the spectrum that was not used for cellular communications before 5G.

The band that is reserved for radar altimeters is 4.2 GHz to 4.4 GHz.

The separation between the 5G band and the 4.2 GHz band where the altimeters are is pretty wide. It’s 220 megahertz. That’s big. It’s like 10 Wi-Fi channels; I don’t know if that means anything to anybody (laughs). But it’s a wide gap.

The problem is that the filters of these old altimeters are such that the signals might spill out of their “lane.” So the radars could be getting signals from a wider band—including 5G interference.

Q4. Is it possible that filters could be applied to the old altimeters to confine them to their assigned lane in the spectrum?

It is in principle feasible. Whether you can actually do it on those altimeters the way they are installed in airplanes, I don’t know. But I would be comfortable in saying that, in principle, it’s doable. It would require a detailed feasibility study.

Q5. It sounds as though a quick solution is unlikely.

It’s going to take a while. We don’t know for a fact how big of a problem this is, because we don’t know how many altimeters are impacted. And if they’re impacted, under what conditions are they impacted? In the short term, it is likely that we are going to continue to see limitations close to major airports.