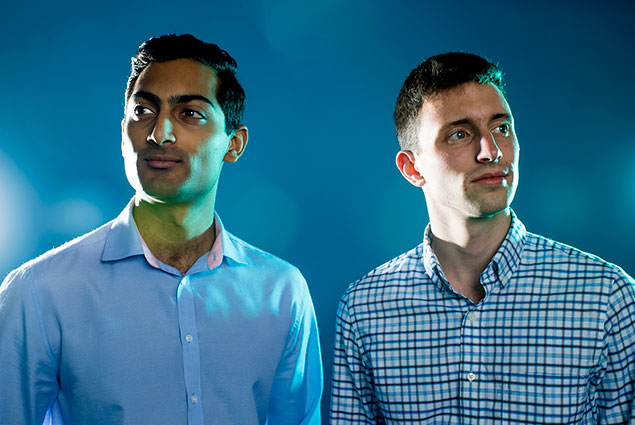 It’s the brainchild of Andrew Smith and Jay Shome, both E’18, who launched the app in July and have seen its user base grow into the thousands over the past three months.

“The goal is to make connecting with new acquaintances as simple and as immediate as possible,” said Smith. “And there’s no other way to do that—unless you use FriendsUp.”

Here’s how it works: After downloading FriendsUp from the App Store or Google Play, link your social media accounts to your FriendsUp profile, choosing what information you want to share. The app will generate a personalized QR code for you. Users can then connect by scanning each other’s QR codes via the app. Your new contact’s name and phone number will be added to your phone in less time than it takes to say “See ya later,” while they will receive notifications to add you to their social networks.

Smith and Shome coded FriendsUp on their own, harnessing the skills they learned on co-op to design and promote the one-of-a-kind app. Smith’s software engineering co-op at America’s Test Kitchen gave him the opportunity to learn the ins and outs of React, a JavaScript library used for building user interfaces like those seen on FriendsUp. And his sales engineering co-op at IBM Resilient gave him the confidence to pitch the app to angel investors, whom he and Shome have had the opportunity to meet at various pitch competitions and exclusive events.

“Running a startup goes hand-in-hand with sales,” said Smith, who, like Shome, is a fourth-year computer engineering major. “It makes it easier to pitch investors if I had spent all day talking with executives from different companies while at work.”

Shome’s co-ops as a project manager at John Hancock and a global real estate intern at the Boston Consulting Group have taught him a thing or two about how to run a successful company, particularly when it comes to market research. “I’ve learned a lot about how to grow a company and how to get traction in the market,” he said.

If their recent success in Boston’s startup ecosystem is any indication, their workplace experience is paying off. Smith and Shome won the Boston Startupalooza pitch contest in August, which enabled them free entry into the 68th New York Private Equity Forum in early October. And they were one of just seven groups of budding entrepreneurs that had the opportunity to present their companies at the Boston New Technology September 2017 Startup Showcase, a networking event for the local startup community.

They are now working with IDEA, which is helping them to create a business model for FriendsUp, and they want to hire brand ambassadors to expand the app’s reach to college campuses across the country. “We’ve spent a lot of time talking with users and finding out what they want in the app,” Shome said. “Most people have downloaded it right away and said, ‘Wow, I need this.’”

Their long-term goal is to monetize FriendsUp by contracting with companies to create QR codes for their social media accounts. They plan to start small, connecting with campus businesses to see if they might be interested in putting the QR codes in their shop windows. “Companies often pay millions of dollars to increase their social media following,” said Shome, reflecting on the app’s potential to generate revenue. “And with a simple QR code scan, you make the whole process of connecting with people and businesses easier and less awkward.”