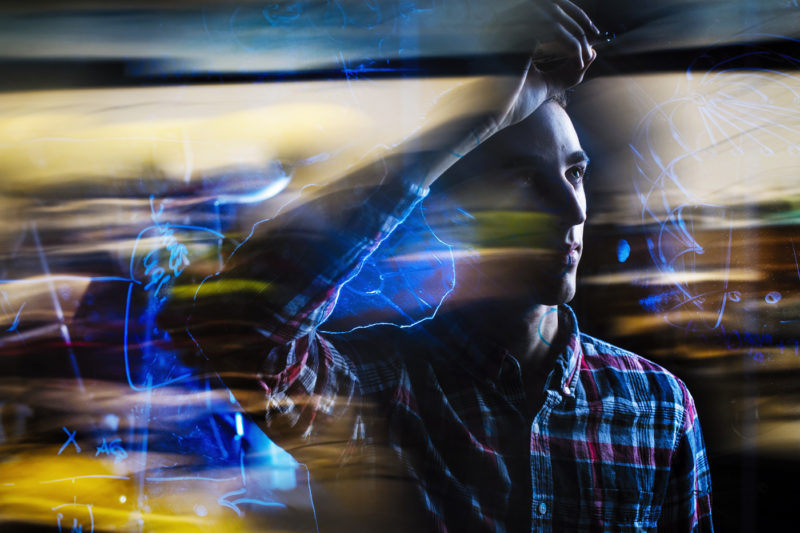 ECE student Brett Daley, E’18, has been named a Schwarzman Scholar, one of only 142 out of 4,000 applicants, and enabling him to enroll in a yearlong, fully funded master’s program at Schwarzman College on the Tsinghua University campus in Beijing.

Northeastern senior Brett Daley says artificial intelligence will be the defining technology of the 21st century. Throughout his Northeastern experience, he’s conducted advanced machine learning research on campus and completed four transformative co-ops—including at Tesla and SpaceX—toward expanding his knowledge of and skills in this field, with aspirations of one day launching a company that leverages AI to promote global prosperity.

Daley, an electrical and computer engineering major in the Honors Program, is now moving closer to the goal. On Monday he was named a Schwarzman Scholar, a prestigious honor enabling him to enroll in August in a yearlong, fully funded master’s program at Schwarzman College on the Tsinghua University campus in Beijing.

Daley, who plans to focus his master’s program on business and economics, describes China as “the Silicon Valley of the world” and says the country is poised to dominate in this field in the years ahead. This summer China unveiled its goal to become a world leader in AI by 2030. He says that his Schwarzman Scholarship will provide a rich global experience through which he can deepen his understanding of China’s culture, economy, language, and legal and regulatory system—knowledge that will serve him well throughout his entrepreneurial journey.

“I believe many of the important technological breakthroughs of the next century are likely to occur in China,” Daley says. “Thus, I recognize the imperativeness of achieving an intimate understanding of it.”

Daley is among the 142 students selected from more than 4,000 applicants for the 2019 class of Schwarzman Scholars. The scholars collectively represent 39 countries and 97 universities worldwide. The program, now in its third year, is designed to prepare the next generation of global leaders for the challenges of the future. Scholars have “demonstrated exemplary leadership qualities and their potential to bridge and understand cultural and political differences,” according to the program.

After completing his master’s program in Beijing, Daley plans to pursue his doctorate in computer science with a concentration in AI.

A broad range of research, co-ops

Daley says his breadth and depth of research and co-ops at cutting-edge technology companies have opened his eyes to the AI revolution and equipped him with valuable real-world experience. “I really wanted to diversify the experiences I had during my co-ops,” he said. “That was a priority for me: never repeat the same job, so I could learn as much as possible.”

For his first co-op, from January to June 2015, Daley worked at Advanced Micro Devices in Boxborough, Massachusetts, where he designed computer microprocessor components, wrote firmware, and even crafted tutorials for other engineers on how to use company-specific design tools.

Then in January 2016, Daley began the first of three consecutive co-ops in California. He first worked at Flextronics, where he focused on circuit design and in one project created a computer circuit board from scratch. Then he worked as a firmware engineering intern at Tesla, where he wrote code for the company’s industrial-size, solar-storage batteries. And finally he worked at SpaceX, where he wrote software designed to test that circuit boards on the company’s next-generation spacecraft worked properly.

Of his Tesla co-op, Daley says the most memorable experience came with two weeks left, when he was dispatched to Tesla’s battery storage facility at the Southern California Edison substation to perform an important and timely firmware update that took four days to complete. Having worked with this specific code, he was called upon to help.

“I was physically, with my own hands, moving us closer to that future,” says Daley, speaking of Tesla’s goal to transition the world more toward renewable energy. “Even though I’d been contributing to that vision throughout my co-op, that was when it became very real.”

Daley’s co-op experiences were bookended by research experiences on campus. In professor David Kaeli’s lab in the summer of 2014, he wrote code for image segmentation—that is, separating out specific elements within digital images. Daley says this type of research has particularly valuable real-world applications in areas such as medical imaging and airport security.

And he’s now working in assistant professor Chris Amato’s robotics and AI laboratory in the Interdisciplinary Science and Engineering Complex. He focuses on deep reinforcement learning, which essentially means training artificial neural networks to perform tasks through trial-and-error. This type of work, he explains, is applicable for training robots, agents, and other smart systems to not only perform tasks but also independently figure out solutions to problems themselves.

To advance this technology of the future, he works in the past, so to speak—with old-school Atari games. Working with an open-source Atari emulator, he experiments with changing the architecture of the neural networks to improve their performance in the games.

Amato said he’s been impressed by Daley—one of only two undergraduates currently working in his lab—and noted the young researcher’s intellect, drive, tenacity, and creativity.

“He’s a student who really dives into understanding the details of how this works, and spends a lot of time getting his research methods down,” Amato said of Daley. He added, “When he’s stuck on something. He doesn’t just try to use brute force to get something to work. He tries to think of smart approaches to solve the problem in different ways.”