Gregory D. Abowd is Dean of the College of Engineering and Professor of Electrical and Computer Engineering at Northeastern University.  Prior to joining Northeastern in March 2021, he was a Regents’ Professor and held the J.Z. Liang Chair in the School of Interactive Computing at the Georgia Institute of Technology, where he also served as Associate Dean of Research and Space for the College of Computing.

Abowd is an internationally renowned and highly cited scientist, well known for his contributions in the general area of Human-Computer Interaction (HCI) and specifically for his groundbreaking research in ubiquitous computing.

In 2008, he was named a Fellow of the Association for Computing Machinery. That same year, he was inducted into the ACM CHI Academy, the most prestigious honor for researchers in HCI.  In 2009, he received the ACM Eugene Lawler Humanitarian Award for his work in autism and technology. 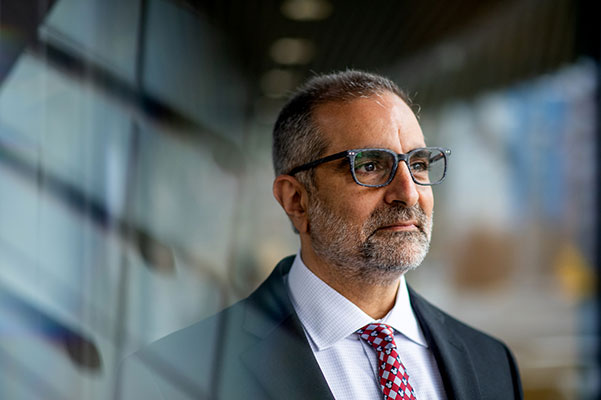 Gregory Abowd, who joined Northeastern as the new dean of the College of Engineering this month, was trained as a computer scientist and mathematician; he comes to Northeastern as a former professor and endowed chair in the School of Interactive Computing at Georgia Tech.

“The distinctions between engineering, science, and computer science have continued to blur and Gregory’s work certainly spans all three,” says David Madigan, provost and senior vice president for academic affairs.

At Georgia Tech, Abowd conducted groundbreaking research in ubiquitous computing—the concept that computing is anywhere and everywhere, omnipresent in our lives in a way that traditional desktop computing isn’t. Internet-connected watches, refrigerators, and vehicles are just the start, and part of Abowd’s research is understanding the social impacts of such technology.

He’ll continue that research at Northeastern with the same interdisciplinary approach he’s used throughout his career. After all, in order to imbue something like a Post-It note with computing capabilities, computer scientists and engineers and scientists would have to work together to create a self-sustaining material to replace the silicon chip that supports most computing today. And societal needs and concerns from disciplines as varied as design and social science must inform these radical ideas of such “computational materials.”

Tell us a bit about your research career. What have you been working on?

Well, in general, when I got to Georgia Tech, I was a particular kind of researcher and I changed rather drastically. Within a year, I was very much influenced by the writings and vision of [computer scientist] Mark Weiser, who is considered the founding father of ubiquitous computing.

His vision was a form of computing that was off the desktop, that included a sensor-based exploration of what our world might be like. And this was a vision that he expressed in the late 1980s! It was a vision of what our world might be like if computers became more prevalent than they were at that time, if they were more than just desktops and personal devices—if they became more part and parcel of our everyday activity and were embedded in our physical environment in such a way that we didn’t even notice where they were all the time.

I was revisiting that vision around 2015-2016, in the context of new technological capabilities, particularly in additive manufacturing, and in the development of nano-electronic devices.

Could you explain that a bit more?

Yeah, so let’s take the phrase “internet of things.” So, when we say “internet of things” today, it’s typically about taking existing pieces of technology and adding a network capability to them so they can connect with other pieces of technology. We are not talking about say, a Post-It note, or a cup, or a shirt, or a pair of glasses; we’re not thinking about what comes to mind for most people when you say “thing.”

I’m interested in making things—entities that we are familiar with in our everyday physical world—that have the capabilities of sensing, computing, and communicating, so that you can achieve Weiser’s vision.

He had two very eloquent sentences at the beginning of his book, “The Computer for the Twenty-First Century.” He writes, “The most profound technologies are those that disappear. They weave themselves into the fabric of everyday life, until they are indistinguishable from it.”

He meant that metaphorically, but you can actually start to think about that more literally, by manufacturing computational capabilities into “things”; by literally weaving them in or manufacturing them as part of how you produce a piece of paper or Post-It note. That’s what I mean, that’s what we’ve been exploring in my lab, and it’s starting to grow around the world, this whole notion of computational materials.

Thinking big picture, what are some of the challenges or issues in the world today that you’re eager to encourage Northeastern students to dig into?

Oh, there’s a ton of them. Data engineering is a huge industry, the cloud, and Big Data, and all that. And big companies are investing a lot of money, to the tune of maybe a billion dollars a month, to maintain and build data centers. And this is projected to be something like 20 percent of the world’s energy supply to feed the power needs of these data centers.

So that is seriously an engineering challenge to say, “How can we reduce the energy reliance for what appears to be an insatiable desire to get more data, and to handle that more data and to infer more things from that data?” That’s why I’m so interested in these kinds of self-sustaining computational solutions.

But more important is what this allows us to do. In parts of the world where power is not an assumed resource, you need self-sustainable capabilities. And, the price of computers, as much as it’s gone down, is still not inexpensive. So to address those kinds of grand-scale problems, you really do need very cheap, self-sustaining solutions to gather that kind of information.

Additionally, any time we’re talking about collecting data, we need to be thinking about the kind of world we want to enable—how we put the right kinds of checks on it.

On the more humanist perspective, I’m very fortunate to be raising two boys on the autism spectrum. That has infused in me a kind of compassion and understanding of neurodiversity. People are wired differently, they think about the world differently. And it is almost always the case that you cannot discern how someone is wired by just observing them or talking to them.

So, if someone does something that seems odd to you, or unnatural or inappropriate, our initial reaction is to think negatively about them, as opposed to considering that they just might think differently about the world.

What do you see for the future of the College of Engineering? How do you plan to lead the college?

Well, I’ve talked quite a bit about my research and computation materials, and it’s true that I will remain as much as possible a very active researcher—that curiosity doesn’t die, you know.

But I realized that you cannot be selfish in this kind of position, you have to be thinking about what’s good for the College of Engineering, what’s good for Northeastern. This is something that’s influenced by my upbringing. I’m the 10th of 12 children in my family, so being in a large family, I understand that it’s never just about me, it has to be about the community.

I’m coming to Northeastern to help it continue to thrive and to help it to strive to be better.

How do you plan to do that?

When you are trying to learn something, it helps a lot to learn in a variety of different modes. You have theoretical, foundational learning that you do in the classroom, but then to understand how those lessons are relevant outside the classroom—that’s what the co-op experience is all about, to me. You learn how your skills apply to other parts of the world in useful ways, and when you’re exposed to other parts of the world, you recognize what else you still need to learn.

And that never ends; you don’t end your education, then go into the workforce, and never learn any new things. So, to me, that’s really the strength of this kind of experiential learning—this play between learning and doing and understanding how the things you learn are relevant not only to enriching yourself intellectually, but helping you be a connected player in the world.

You mentioned this idea of being connected to the world. How will you foster industry partnerships for the College of Engineering?

Yes, so clearly it’s important from the experiential learning perspective to have partnerships with industry leaders, but I’ll also be a little broader than just talking about industry. You have to take into account your local situation, and build off the strengths of what’s local.

So when you talk about industry, particularly with regard to Northeastern’s Boston campus, you look at what the strengths are locally. In Boston, there are tons of industries: Medical, robotics, biotechnology, the list goes on. My view is not to ignore the local expertise and industry, even though we’re in this highly connected world where we have access to people and ideas everywhere.

Of course, we just spent a year in a pandemic where we’ve been forced to be remote, but I think fundamentally, it is easier and more natural for us to work face-to-face with people. And when people are closer to you, you have more of an affinity with them.

All this is to say, understand your local environment and take advantage of its strengths.

How do you plan to ensure a rich diversity among students, faculty, and staff in the college?

Well, as I mentioned earlier, I have a personal experience with neurodiversity, which, I think, is a particularly interesting form of diversity, because it’s for the most part invisible. And when it makes itself visible, it’s usually highlighting differences that people have negative reactions to. But, having raised two boys who are neurodiverse, I’m highly attuned to, and very sympathetic about, people’s neurodiversity.

One way to nurture a diverse environment is to ensure that there are appropriate role models. So, you need faculty who represent all these different perspectives, and you also need faculty who are excellent and feel supported. And you’ve got to balance all of these things.