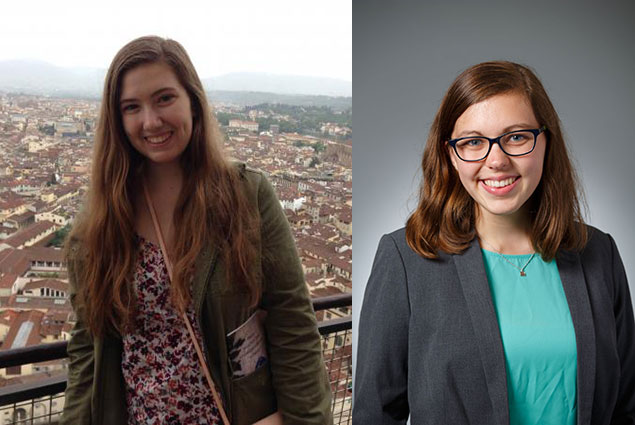 Students Sarada M. Symonds, E’19, computer engineering and computer science, and Elizabeth Wig, E’20, electrical engineering, were each recently awarded $5,000 scholarships for the 2017-2018 academic year by the Society of Women Engineers (SWE). Symonds received the 2017 Ada I. Pressman Memorial Scholarship, her second SWE scholarship in the past two years. Wig, a Dean’s List student, earned the GE Women’s Network Scholarship. Both students will be recognized at SWE’s annual conference in Austin, Texas, this October. 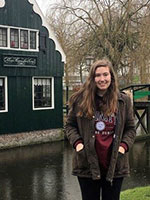 Sarada Symonds: An Algorithm for Happiness

A San Francisco Bay Area native, Symonds entered Northeastern with a fascination for predictive algorithms and undecided on which engineering field she wanted to pursue. A programming course set her on her current path. “I soon realized I liked programming,” she says. “Programming is just a tool computer scientists and engineers use to implement algorithms. That’s how I knew computer engineering was the right track for me.”

Symonds recently completed a semester abroad at Trinity College in Dublin, an experience she describes as “awesome.” “A lot of engineers think it’s really difficult to study abroad since we have so many course requirements,” she explains, “but my experience shows that it’s absolutely possible!” In fact, Symonds is considering an international assignment for her next co-op in light of her positive experience.

She is currently in her second co-op at MIT Lincoln Laboratory, a Department of Defense research and development lab. Her first co-op was in web and mobile app development at a small San Francisco area software design firm. “Being exposed to a variety of work experiences and cultures during my co-ops is so important in helping me decide what kind of work I want to do in the future,” she says. Symonds plans to enter the computer engineering field, earn a master’s degree and eventually move into a leadership position.

“We live in an age where data and algorithms are changing people’s lives,” Symonds writes in her scholarship application essay. “Being an engineer means I’ll get to spend the rest of my life solving problems by making algorithms more efficient and accurate. To me, that’s an algorithm for happiness.” 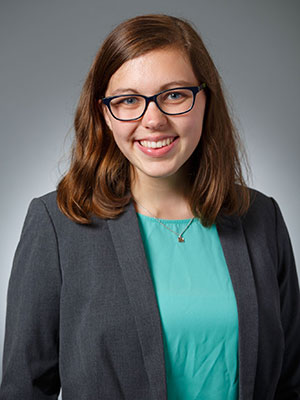 Wig’s interest in an engineering career grew out of her childhood passion for math, inspired by her mother who was a math teacher. “When I was three years old, the career I imagined for myself was a ballerina princess mathematician, combining the three jobs I found coolest at the time,” she recalls. “Engineering is a way for me to harness the math and science that I love to improve the world.”

Currently in her first co-op assignment at Draper Laboratories in Cambridge, Mass., the Northborough, Mass., native has a strong interest in hardware, electromagnetics, and optics.  “I’m learning a ton about what I want to do,” she says of her co-op experience. “It’s really helped to define my direction in engineering.”

Wig expresses a great deal of pride in being a woman in engineering at Northeastern. “Whenever you encounter another woman engineer, you can count on her being extraordinary,” she says. “Whether they’re working on solar panels in Tanzania, designing applications for Microsoft, leading STEM education workshops for kids, doing groundbreaking biomedical work at Harvard Medical, or founding organizations to include LGBT people in STEM, women engineers are phenomenal. And I’ve met women engineers at Northeastern who are doing all these things.”

Wig calls the Northeastern community “inspiring” and says being an engineer introduced her to life-changing opportunities. “I may not be a ballerina or a princess, but nonetheless, engineering has fulfilled my wildest dreams.”

Society of Women Engineers at Northeastern

Both students expressed thanks to SWE for their scholarships and for providing a supportive environment where they can find mentors, learn about career opportunities, build a professional network and be part of a vital community. They also acknowledge the valuable support of Assistant Dean Rachelle Reisberg for bringing scholarship opportunities to their attention and encouraging them to apply.

Founded in 1950, SWE is a U.S.-based, not-for-profit educational and service organization whose mission is to inspire women to achieve their full potential in careers as engineers and leaders, expand the image of the engineering profession as a positive force in improving the quality of life and demonstrate the value of diversity.