Winter with the Penguins 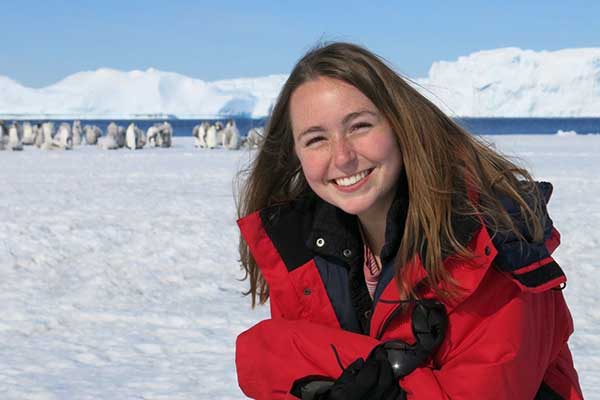 When Isabelle Brandicourt, E’23, electrical engineering, fell in love with marine biology at the age of ten, she never imagined that she would someday have the opportunity to live and work with penguins in Antarctica.

After initially planning to major in marine biology in college, she decided that having “hard skills” was an advantage. “I enjoyed building things and working with my hands so I switched to a major in electrical engineering and decided to find a way to combine it with my interest in marine biology,” Brandicourt says.

She chose Northeastern for its unique co-op program, Boston location, and “campus feel.” Brandicourt was also attracted by the potential of minoring in marine science. She was particularly interested in Northeastern’s Three Seas program, which offered a path to fulfilling a non-engineering minor by providing the opportunity to spend a semester studying in three different marine environments.

From power systems to penguins 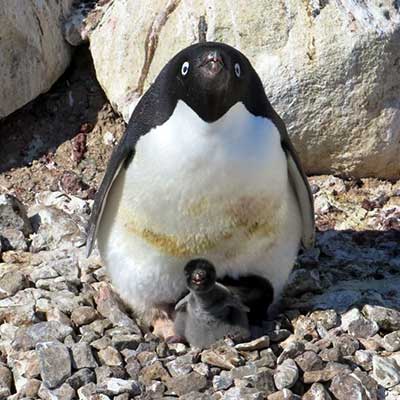 Brandicourt loaded up on engineering courses during her first two years at Northeastern. With her passion for marine biology in mind, she applied for a co-op at the Woods Hole Oceanographic Institution (WHOI), as well as a co-op at Doble Engineering Company in Marlborough, Mass., a provider of diagnostics and engineering expertise for the electrical power industry. Doble offered her a co-op before she had heard from WHOI, and she accepted.

At Doble, Brandicourt worked on a “very electrical engineering-related” task: examining printed circuit boards to troubleshoot, test and repair them and identify potential failure points. “I ended up learning a lot at that co-op and met some really cool people,” she says.

Following the completion of her first co-op in spring 2021, WHOI invited Brandicourt to do a summer internship where she worked on a project to help identify individual Emperor penguins among large colonies returning to the German base in Antarctica. The project involved placing GPS loggers on penguins, tagging them with RFID chips similar to microchips used to identify dogs. Brandicourt helped design a series of antennas that would read each RFID tag, making it possible to track each penguin’s movement.

In mid-August 2021, Brandicourt received a message from Daniel Zitterbart, who is the professor and principal investigator with whom she was working at WHOI, asking “How would you like to go to Antarctica this winter?” Zitterbart, who oversees labs at Woods Hole, Germany, and France, needed to fill an opening for a technically experienced individual at the French lab’s Antarctica base. He recommended Brandicourt based on her strong interest and recent internship experience.

“I wanted to do this co-op primarily because of my interest in developing better ways to study marine life, the interaction in the ecosystem and the effects of climate change,” she explains. “I had to make it work with the school.” Making it work meant completing the end of the semester remotely and in an accelerated timeline. And she had to work it out with her professors. “It required lots of cooperation and communication. All of them were very supportive,” she says.

Brandicourt left in mid-November 2021, flying from the U.S. to Paris, Singapore, Melbourne, and finally Tasmania—the closest populated land north of the Antarctica station—where COVID protocol required a two-week quarantine in a hotel. From there, it was a seven-day voyage on the “Astrolabe”—a French military vessel with ice-breaking capabilities—to get to the Dumont D’Urville base in Antarctica and officially begin her three-month co-op.

Measuring the health of the ecosystem

Penguins generally stay on land for a long time in breeding season, according to Brandicourt. “When they leave to go to the sea, their stomachs are empty, all of their energy is depleted and they travel faster to the ocean because they’re lighter,” she explains. “Once the penguins get a ton of food, they return with full stomachs, and on average they walk more slowly.”

The goal of Brandicourt’s project was to record the speeds of the penguins going to sea and returning to land, and compare the results over time to develop a metric on the health of the ecosystem. For example, smaller differences between speeds in leaving and returning might indicate that penguins are having more difficulty finding food and are therefore not traveling quite as slowly on their return.

Her second assignment proved to be both stressful and gratifying. Taking over for an individual who had to leave Antarctica unexpectedly, Brandicourt and a PhD student on the base assumed responsibility for maintenance of a colony of Adélie penguins, which included hands-on monitoring and placing RFID tags in the chicks.

While penguin chicks haven’t learned to fear humans, the adults are often wary, which requires handling them carefully and quickly. “We had to run after penguins as they were leaving the colony, catch them in a big net, then carry them the whole way to the hut where we did the procedure,” explains Brandicourt.

Although she was thrust into a lot of work she was unfamiliar with, including doing blood draws on penguins, Brandicourt describes the experience as “super fun.” “I loved working every day with the penguins.”

French immersion and a Google-free environment

Handling penguins wasn’t the only challenge Brandicourt faced. She had to learn to speak French too. With two years of high school French, her ability to speak was extremely limited, making it difficult to fully participate and engage in group conversations in the first few weeks. “I would get lost and struggle to ask questions,” she says. “I didn’t get the jokes.”

She persisted and forced herself to learn. There were only a handful of people who spoke English well. “I was able to change some minds about Americans because I made a point to learn and speak French rather than assuming that everyone would speak English,” she says.

“Immersion is the best way to learn the language” she explains. “Antarctica was an incredible experience, and the language piece was on par with the science. Having the ability to come back and say ‘I’m fluent’ is very cool.”

For Brandicourt, one of the most difficult, and ultimately rewarding, aspects of doing a co-op in a remote environment was learning how to complete the required engineering and field biology work without access to the internet. “The base had only three computers connected to the internet, and you had to reserve time to use them outside of work hours,” she says. “We had email and that was it. If I had a question, I couldn’t Google information. If I had a problem, I had to figure out how to solve it. It was really, really hard, but in terms of learning, it was extremely valuable.”

The future is global

Following her Antarctica adventure, Brandicourt’s co-op continues stateside. She will be spending two weeks cruising between Nova Scotia and Newfoundland on a research project designed to decrease whale strikes by deploying infrared detection cameras to detect whale blows inside of a ship’s strike range. Next up is the Three Seas program from July through December, followed by another co-op and one more semester of classes in 2023 before she graduates.

Brandicourt says that her co-ops gave her a lot of ideas about where she can take her career. “I realized you can take engineering in a lot of different directions that are not the traditional ones. It helped me a lot in thinking about where I’ll go after this, for example, whether I want to go into industry or academia and research. I think I’m leaning toward the latter.”

The Antarctica experience also unleashed Brandicourt’s desire to travel for a career and “keep seeing the world.” She enthusiastically recommends a co-op that gets students out of their local environment. “You get a nice perspective on the rest of the world,” she says. “That’s really important in my opinion. My advice to other students is take advantage of the global opportunities at Northeastern.”