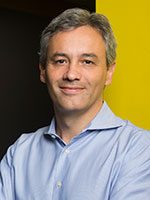 ECE Professor Tommaso Melodia has been named William Lincoln Smith Professor in recognition of his significant research contributions and exceptional leadership in the field of electrical and computer engineering.

The William Lincoln Smith Professorship was established by Mr. Farnham Wheeler Smith, E’24, in honor of his father, William Lincoln Smith, who had served as the first Chair of Electrical Engineering at Northeastern University, and was granted an honorary degree in 1937. This prestigious honor is awarded to a renowned scholar and teacher of the highest caliber, who has a record of accomplishment, a national and international record of research accomplishment, is an individual who will provide leadership in the expansion and diversification of the department research base, and is a researcher who will bring stature and expertise to the discipline.

Tommaso has an impressive record of accomplishments, leadership, and research contributions. His main research interests and contributions are in the area of modeling, optimization, and experimental evaluation of next-generation wireless networks and Internet of Things (IoT) systems. He is well known for contributions to the area of sensor networks in environments where radio-frequency wireless propagation is ineffective, most notably in biological tissues and underwater.

Tommaso has published nearly 200 articles, mostly in top IEEE and ACM journals and conferences, and is highly cited. Additionally, he was an invited keynote speaker at conferences, including ACM Mobisys, IEEE PIMRC, European Wireless, IEEE e-Health, among others, and his research has been widely covered by popular media outlets, including CNN’s Erin Burnett’s Outfront, Wired, BBC News, and the Huffington Post, among others. He has raised significant funding for his research through approximately $20 million (~$12.5 million as lead principal investigator) in awards from a variety of federal agencies, including the National Science Foundation, the Air Force Research Laboratory, the Army Research Office, the Office of Naval Research, DARPA, as well as several industry partners. He received the National Science Foundation CAREER Award, is an IEEE Fellow, and was recognized as a College of Engineering Faculty Fellow, a Søren Buus Outstanding Research Awardee and a Faculty Research Team Awardee.

Beginning in 2017, Tommaso was named the Director of Research for the Platforms for Advanced Wireless Research (PAWR) Project Office, a $100 million public-private partnership between the National Science Foundation and a consortium of 28 industry leaders in the wireless networking field that will stand-up four city-scale platforms for advanced wireless research in the United States. He is also the founding director of the new Institute for the Wireless Internet of Things. Under his leadership, the Institute is poised to create a vibrant liaison among Northeastern researchers, government, leading industry players and startups, and will catalyze and build upon Northeastern’s core strengths in this area.

Tommaso has also held several leadership positions to contribute to the advancement in his field. He has served as Associate Editor for some of the leading journals in the field of wireless communications, networking, and IoT. He has also been the Technical Program Chair for several high-visibility conferences in the wireless networking field, including IEEE INFOCOM 2018, the flagship IEEE conference on computer networking. He was the Technical Program Vice Chair for IEEE GLOBECOM 2013, and General Chair for IEEE SECON 2019, ACM NanoCom 2019, ACM WUWNet 2014.