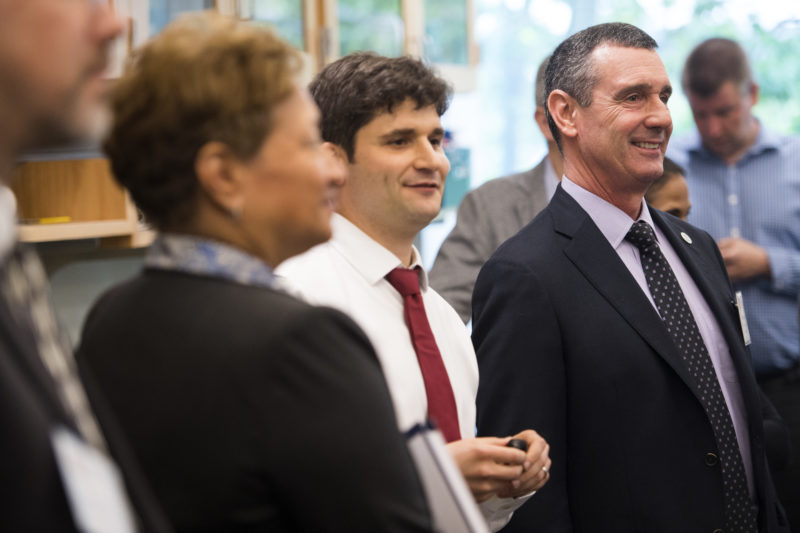 Transportation Security Administration Administrator David Pekoske toured the Center for Awareness and Localization of Explosives-Related Threats (ALERT) on Friday to see if the technology Northeastern is working on can be implemented at security checkpoints.

The Center for Awareness and Localization of Explosives-Related Threats is focused on improving the detection, mitigation, and response to explosives, weapons, and other contraband.

“ALERT has a good reputation as a research center that looks at technology solutions in the near term and far term,” said David Pekoske, the administrator of the TSA. “If we see technology and like it, we’ll try to find ways to rapidly implement it at our checkpoints.”

One research team has designed video software to track airplane passengers and their luggage as they move through airport security—a project covered by The Wall Street Journal. The software, created in partnership with the TSA, the Massachusetts Port Authority, and the security screening company Rapiscan, can automatically identify when passengers enter and exit a checkpoint, track passenger belongings, and spot unusual behavior such as item theft.

Another team has created safe training aides for bomb-sniffing dogs. The aides, which contain small amounts of explosive material but cannot explode, have already been tested by the Massachusetts State Police, the Toronto Police, and the New York Metropolitan Transportation Authority.

One of the labs, led by assistant professor Jose Martinez-Lorenzo, is focused on designing a low-cost millimeter wave radar system to detect threats concealed under the clothing of passengers walking through an airport.

Martinez-Lorenzo said the system is capable of detecting the presence of guns, knives, and other contraband when people are walking at a speed of up to three meters per second. “We’re developing the next generation checkpoint,” he said.

Michael Silevitch, the center’s founding director, told Pekoske that ALERT and the TSA share the same primary goal: to protect the nation from terrorists.

“We’ve made significant improvements in security infrastructure,” said Silevitch, the Robert D. Black Professor of Electrical and Computer Engineering. “We’ve been able to meld academic knowledge and understanding with industrial pragmatism to enable a transition of the best and brightest ideas into practice.”