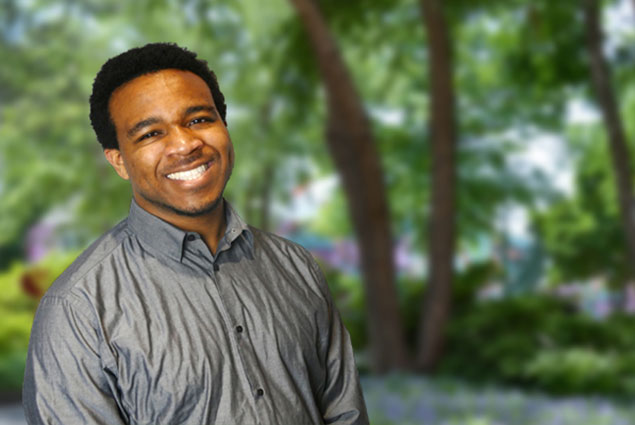 After being accepted into Northeastern’s prestigious University Scholars Program for his outstanding high school performance, Delaware native Thurston Brevett, BS Electrical and Computer Engineering 2018, intended to take full advantage of the College of Engineering’s top academics and well-known experiential learning programs to make the most of his degree.

A fan of tinkering with remote-controlled vehicles in his backyard as a kid, Brevett took this hobby, and his adeptness with math and science, and selected electrical engineering as his major. During his first year, he began working as part of the Gordon Center for Subsurface Imaging and Sensing (CenSSIS) research center, led by College of Engineering Distinguished Professor Michael Silevitch, and working with College of Engineering Distinguished Professor Carey Rappaport, of the Department of Electrical and Computer Engineering. He participated in the development of a synthetic aperture radar scanning system, similar to body scanners found at airports, which can detect dielectrics, or electrical insulators that are often found in plastic explosives.

Brevett continued working with radars during his first co-op with MIT Lincoln Labs. He and colleagues processed and analyzed experimental data to determine the impact the creation of a wind turbine farm at Naval Air Station Patuxent River in Maryland would have on the radar systems used to detect the base’s aircraft.

For his second co-op, Brevett—a Bermudian citizen by birth—created his own joint co-op in his mother’s home country with consulting and construction company Onsite Engineering Services and Electronic Communications Ltd (ECL), a leading Bermuda radio provider for handheld radios, GPS, and dispatch and communications solutions.

Brevett completed his most recent co-op at NK Labs in Cambridge, Massachusetts, working with image processing algorithms for x-ray images to create a technological solution for the inspection of tiny, soldered circuit boards for electronics, instead of the manual inspection currently in place.

All of Brevett’s hard work has also led to some pretty impressive accolades: He was a finalist for the prestigious Rhodes Scholarship to promote civic-minded leadership, as well as for the Knight-Hennessy Scholarship, a graduate fellowship program at Stanford University that seeks to support graduate students to solve large-scale global problems. He was also selected to receive a GEM Fellowship, which fully funds doctoral studies in science and engineering for outstanding students from underrepresented communities, as well as a National Science Foundation Graduate Research Fellowship.

Looking toward the future, Brevett intends to pursue his PhD in digital signal processing with the eventual goal of becoming a professor himself one day. As the president of Eta Kappa Nu, which offers free tutoring service to all electrical and computer engineering students, and the founder of Bits & Bots, which teaches robotics to low-income middle school students, he is a natural teacher.

“By teaching, you begin to understand what you’re doing even better,” Brevett says. “I love connecting with people and discovering different ways to teach different learners. Part of what I’ve learned at Northeastern resonates with my teaching style: answering the question, ‘Yes, we’ve solved this particular problem, but can we solve it better?’”