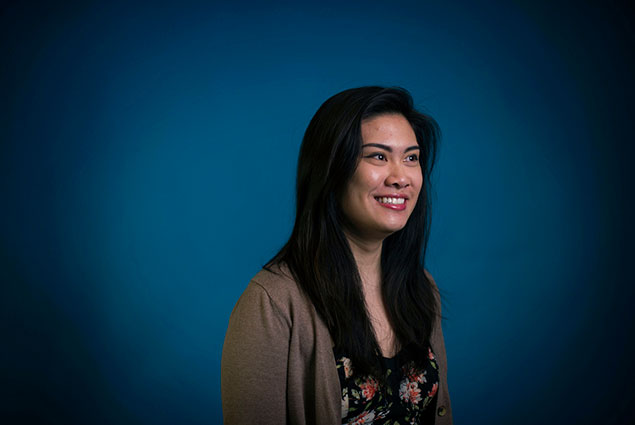 Recent ECE Alum Liane Wong, E’17, reflects on her experiences while at Northeastern.

Liane Wong, BS, Electrical Engineering, 2017, is a well rounded student. She completed three co-ops in the engineering industry, participated in a service-learning program to Belize, where she worked to empower local farmers, and served as co-chair of the Asian American Center’s Asian American Students in Action peer mentoring program. Here, she reflects on her Northeastern experience and looks ahead to her future in biomedical engineering.

I’m going to continue working part time at Micro-Leads, a medical device company where I did my third and final co-op. Ever since I was a kid, I’ve been interested in the medical industry. But it wasn’t until co-op that I realized that I’d like to focus on medical devices. I’ve considered going to graduate school, but I want to work in the industry a little bit longer to narrow down my focus and get a feel for the type of graduate research I’d like to do.

Q2. Your undergraduate accomplishments run deep, from being named a member of Northeastern’s Huntington 100 to completing a Dialogue of Civilizations to Taipei, where you focused on biomedical optics. What would you categorize as your biggest achievement at Northeastern?

My work in the Asian American Center was a pivotal experience for me. When I enrolled at Northeastern as a freshman, I was accepted as a mentee in its peer mentoring program. I became a mentor myself in my second year and was named co-chair of the program in my third year. The experience was crucial to improving my leadership and development skills. I was very close with my co-chair—Kelly Chia, PHARMD’18—and feel like we designed a truly special program. We focused on Asian American identify and development, but we also emphasized community development. We wanted to make sure that incoming freshmen had a home here at Northeastern while ensuring that they understood the opportunities available to them at the university. Q3. How have your co-op experiences—including your work at the engineering consulting firm Boston Engineering and the digital healthcare company MC10—prepared you for the next phase of your professional journey?

I was undecided when I enrolled at Northeastern and eventually chose to major in electrical engineering. But I wasn’t sure what I wanted to focus on, so I used co-op as an opportunity to explore my options. My first co-op, at Boston Engineering, granted me access to a lot of different projects, which allowed me to narrow down my interests. I realized that I really liked biomedical engineering and subsequently decided to seek out more co-ops in the field. At MC10, I worked on a wearable patch that measures biometric data. At Micro-Leads, I went a step further and worked with implantable technology. I like helping people, which is why I like biomedical engineering. It’s fulfilling to know that the engineering work I’m doing is making a difference.

Q4. What will you miss most about the Northeastern community?

Northeastern’s Asian American Center truly has been my home away from home. My college experience would have been completely different and not as enriching if I hadn’t decided to get involved with the center. I’ll miss the feeling of being unconditionally supported by people whom I grew to think of as my friends and my family. The center fosters a sense of strength and community among the Asian American students on campus, and when I graduate that’s something I’m going to have to look for in other places. But I definitely plan on returning to campus to visit.

Q5. What advice do you have for incoming students?

Take time during you freshman year to explore your options. Knock on many doors. Take college by the reins. You never know what’s going to happen, but the only way good things will happen is if you put yourself out there. That’s the path that I chose. During my first year, I joined tons of clubs and organizations and found myself at the AAC, and I love how my experience turned out.