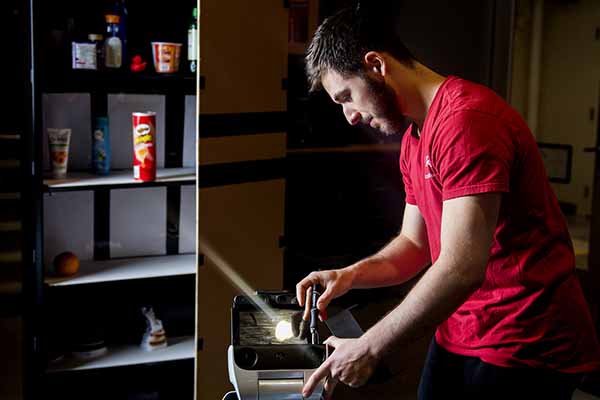 Anas Abou Allaban is a fourth year Electrical & Computer Engineering student with a minor in Mathematics. Originally from Syria, however, born and raised in Cambridge, MA. He has completed a co-op at iRobot as Lead SEIT Intern and is currently an R&D co-op at Northeastern’s RIVeR Lab as part of a collaboration initiative with Arcelik. He is an IEEE-HKN and Tau Beta Pi member. Anas enjoys trail & obstacle course running and DIY projects in his spare time.

If you ask my friends about me the first thing they would probably say is that I’m a robot – I always follow a strict schedule, “talk” with robots everyday, and am rather methodical in my thought process. My character emulates my passion of working with robots. If it has a processor, actuators, and an end effector (hand), then I have a new friend I can “talk” with. It’s a passion that has grown exponentially as more of my time is spent around different robots.

I started at Northeastern as a MechE specializing in mechatronics to build robots. The curriculum however was too much free body diagrams and not enough robotics. So I became an ECE to work more on the ‘heart’ and ‘blood’ of the robot. The curriculum gave me my fix of processor design, algorithms, and circuits, but it did not satiate my appetite for developing pertinent applications in robotics. With a drive to learn more about robots, my now voracious appetite lead me to pursue bleeding edge technology; to research. This was where I met Prof. Taskin Padir who gave me the opportunity to research robotics at the RIVeR lab and great life advice: “Play is the highest form of research.” (Einstein) And so I went to play with robots…

Since then, I got to tinker, discover, and solve problems with robots. From blended shared control on Turtlebots & Jackals, to visual servoing on NASA’s Valkyrie, I took every opportunity to play with robots and apply novel algorithms that make them come to life. The RIVeR lab, aptly nicknamed the robot emporium, was one of my favorite places to be. The people here shared the same passion I had towards robotics. We named our robots, gave them toy mascots, and discussed research papers and applications. I saw it as a space where I could grow personally and academically.

The path to Robocup@Home began in 2017, when the RIVeR lab and 4 other US universities were selected by Toyota to receive a ‘Human Support Robot’ – Prof. Padir named it Frasier. Toyota leased the robot for free provided we perform research projects on it and participate in Robocup@Home: a competition for applying robotics research for service robots. Robocup has three stages, each with specific tasks. Stage 1 has 5 predefined tasks involving speech and person recognition, picking and storing groceries, following people, and navigation in a home environment. Stage 2 builds upon that by having robots complete a sequence of random complex tasks such as picking up objects and taking them to a person or trying to find an object in the arena. The third and final stage is an open challenge where the top 2 teams showcase their research in a live action demo, to a technical committee. This committee usually consists of Robocup Trustees and “VIPs” from large companies like Nvidia, Mathworks, and Softbank.

Our first Robocup was in Nagoya, Japan, where our team consisted of only two people (compared to the other teams of 10+ people) – Tarik Kelestemur, a PhD student, and me. I was tasked with the speech and person recognition task and Tarik the storing groceries task. We placed 6th in the first stage which did not qualify us for the second stage. The second Robocup was in Montreal, Canada, and this time we had the support of Naoki Yokoyama, a BS/MS, and other undergraduate students. We placed 2nd in the first stage and 4th in the second and third stage. We never expected to make it past the first stage (especially since we were still the smallest team) and so we basically pulled a caffeine & snack-induced week long hackathon completing the second and third stage tasks. Tarik’s on-the-fly grasping and Naoki’s NLP techniques were really what pushed us to the final stage.

Despite the setbacks and difficulties we encountered at Robocup, it was a great learning and networking experience. We got to meet high-profile academic figures at the Robocup Symposium and connect with the researchers at the Toyota Research Institute. However, my passion is not in robot competitions: its in making breakthroughs in the field of robotics, developing cutting edge technology for robots so they can impact our lives. This desire has me set on completing a PhD thesis that combines the rave of machine learning with the cornerstone of robot control systems: the intersection of model based and data driven control. Maybe somehow use blockchain technology too because…blockchain!