“S-POWER showed me that if you give people the resources to succeed—the resources someone else might have grown up with if their parents were engineers—they can do just as well.” Madeleine Weaver, E'22, electrical and computer engineering S-POWER graduate

S-POWER: A Successful Model Toward Equalizing Opportunities for Underrepresented Students 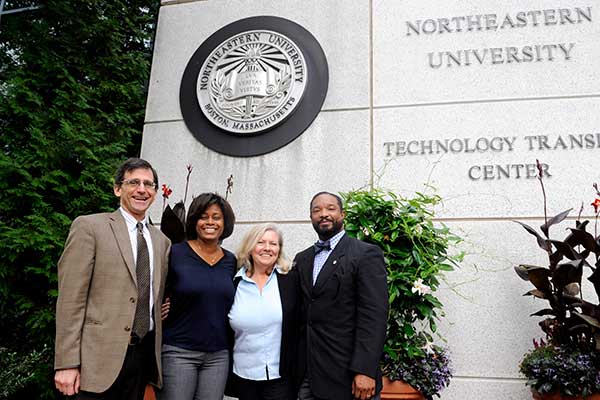 Main photo: The success of the Student Pathways Opening World Energy Resources program has led to it being institutionalized at Northeastern. Program leads include (left to right): Bradley Lehman, professor of electrical and computer engineering; Marilyn Minus, professor and chair of mechanical and industrial engineering; Claire Duggan, director of the Center for STEM Education; Richard Harris, associate dean of diversity equity and inclusion; and (not shown) Rachelle Reisberg, assistant dean, engineering enrollment and retention; and Luis Frias, associate director of diversity programs.

The term “transfer shock” describes what happens when students enter a competitive institution without being given the tools to succeed there. For some students, it’s about making the academic leap from a less challenging institution or community college. For others, it’s about navigating university life alone, with few college-educated family members or role models to show them the way. In most every case, it stems from a disconnect: The students “don’t know what they don’t know” about higher education, and their educators don’t grasp that they were never given that guidance. In the end, the student is as frustrated as someone who’s been given a puzzle to assemble without knowing some of the pieces are missing.

The Northeastern University S-POWER program was recognized with a Facilitator Award at the 2022 STEM for All Video Showcase funded by the National Science Foundation.

In 2016, though, a team from Northeastern University’s College of Engineering was awarded a $5 million National Science Foundation S-STEM grant for a program to fill those gaps. Known as S-POWER (Student Pathways Opening World Energy Resources), the five-year grant provided financial aid as well as academic and mentoring opportunities for students who could benefit from extra preparation for the university environment. It was largely designed for—though not limited to—students entering Northeastern from community colleges and Historically Black Colleges and Universities (HBCUs). In May 2022, 16 of them graduated, leaving Northeastern for prestigious graduate programs or careers at companies including Apple, Facebook, General Motors, and Lockheed Martin. More than 140 more are still successfully on the road to degrees in engineering fields through S-POWER. The retention rate, organizers report, is outstanding—well over 90%.

Moreover, the program is on its way to meeting one of its other goals: setting a blueprint for other programs in the same mold. While organizers stress that S-POWER is just one piece of a larger effort—one attempt among the many needed to equalize opportunities for underrepresented students—it has emerged as a powerful one. The program has now been institutionalized at Northeastern—that is, provided with university funding to continue its work beyond the NSF grant period. “For all intents and purposes, it’s even gone beyond what we initially intended,” said Richard Harris, associate dean of diversity, equity, and inclusion in the College of Engineering.

“Working with the S-POWER students, particularly at the graduate level, has provided the team with much insight into the unique social, research, and experiential challenges that these students face in pursuing a MS degree,” said Marilyn Minus Marilyn Minus, professor and chair of mechanical and industrial engineering. “This grant has allowed the team to examine and develop multiple pathways to support the students, beyond the S-POWER scholarship, throughout their time here at NU toward successful completion of their degrees. We can now share these best practices with our partner institutions.”

As conceived back in 2016, the purpose of S-POWER was two-fold: addressing the low persistence rate of underrepresented minority students in competitive STEM programs, while supplying diverse and qualified talent to meet the needs of the U.S. energy sector and other STEM-based industries. The program has been led by a Northeastern team including Harris and Minus, along with Claire Duggan, director of the Center for STEM Education; Rachelle Reisberg, assistant dean, engineering enrollment and retention; Bradley Lehman, professor of electrical and computer engineering; and Luis Frias, associate director of diversity programs.

Building on the work of previous diversity and inclusion efforts dating back to at least 2010, S-POWER was designed around partnerships with select community colleges—Mass Bay, Middlesex, and Northern Essex community colleges, all in Massachusetts—as well as HBCUs—Clark Atlanta University and Hampton University. Crucially, the program doesn’t only begin when students reach the Northeastern campus. It’s been carried out in concert with the “sending institutions”—the colleges where the students started out—so each student can be prepared with key courses and guidance before entering Northeastern. Some students attend Northeastern’s “summer bridge” program for extra academic preparation before their first semesters at their new university.

Candidates for the S-POWER program include not only underrepresented minorities but also first-generation college students and those with any socioeconomic disadvantage. What all those groups sometimes lack, upon entering competitive universities, is “social capital”—the support and academic experience that students from wealthier, more educated social circles might take for granted. From a financial aid standpoint, S-POWER allocated up to $30,000 per student. Beyond that, though—depending on each student’s background—the program has stepped in to offer everything from academic tutoring and one-on-one advising to assistance with housing and family dynamics. For Reisberg, the value of the program is epitomized by one S-POWER student who came to Northeastern with very few educational or socioeconomic advantages, yet ultimately graduated with a 3.5 GPA. “It’s the kind of success story that I think would not have been possible at a lot of institutions,” said Reisberg. “Without the mentoring, without that coaching and encouragement, she would’ve been lost from the get-go. And now she’s blazing trails. We’re so proud of her.” 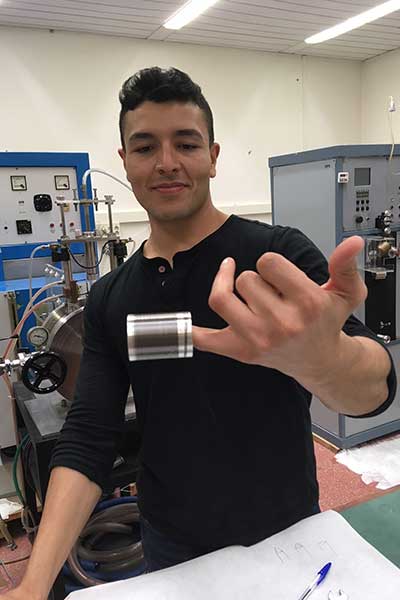 When students reflect on their time in S-POWER at Northeastern, one common thread is that it broadened their horizons, reshaping the life goals they’d grown up with before entering the program. One student, Juan Mesa, pursued a mechanical engineering degree with the simple goal of helping in his father’s auto repair business, but found a much more expansive field with countless applications. He would ultimately pursue a research experience in Spain and enter a PhD program with a focus on robotics.

Another student, 2022 graduate Madeleine Weaver, once planned on becoming a waitress or pastry chef. After transferring to Northeastern from Mass Bay Community College through the S-POWER program, she completed a degree in electrical and computer engineering—at one point working in an augmented reality lab at the University of Southern California. Now heading to Carnegie Mellon for her master’s, she’s pursuing a career as an animatronics engineer. Like others in the program, Weaver said the key to S-POWER was its mentorship opportunities, matching students not only with faculty and staff advisors, but with upperclassmen who’d also transferred from community colleges and shared the same experiences. In the same way, she’s now advising younger students from similar backgrounds. 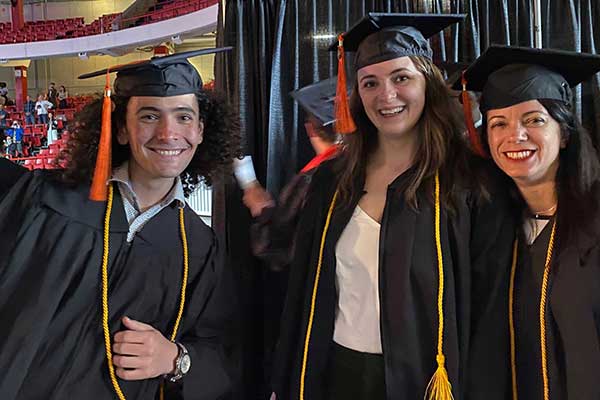 “I think that’s the best part—looking at the kids who are where I was and feeling so excited for them,” she said. “S-POWER showed me that if you give people the resources to succeed—the resources someone else might have grown up with if their parents were engineers—they can do just as well.”

For 2022 graduate Tajonae Oyelowo, who transferred from Case Western Reserve University, S-POWER became a link not only to other transfer students, but to fellow minority students and advisors. A computer engineering major, she was named to this year’s Huntington 100 and graduated with a job offer already lined up. 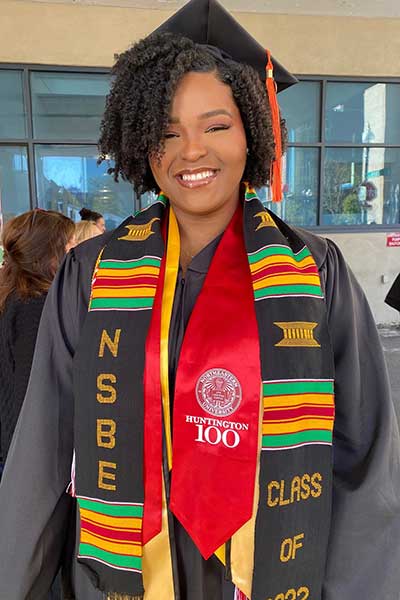 Tajonae Oyelow, S-POWER graduate in computer engineering, and named to Huntington 100. She has been offered a full time position in her field.

“It’s hard just transferring to a new university—but it’s especially hard as a minority student at a predominantly white institution,” Oyelowo said. “I think S-POWER is important because it brings you together with students who relate to your experiences. It’s easier to succeed when you have advisors to support you and show you the opportunities that you have.”

Jordan Alves, who entered S-POWER after transferring from Bristol Community College, said it was regular meetings with Harris that got him through his first year at Northeastern. “The transition to Northeastern was shocking to me,” he said. “I had a very difficult time with the learning curve and the difference in expectations. Dean Harris kept me on track, and I didn’t want to let him down.

“I’m very, very thankful for the mentoring and support from all the S-POWER students and faculty,” he added. “No matter what, I knew I could reach out to them and get support or assistance immediately. I’ve never had an academic support system like that in my life, and I can’t speak highly enough about the impact that’s had on my college experience.” After graduating with a degree in bioengineering, Alves started a job with New York City-based startup Rover Diagnostics.

“S-POWER just transforms how the students see themselves—how they understand their trajectory,” said Harris. “They no longer feel limited in what their opportunities and options might be.”

As Harris noted, one more benefit to S-POWER is that it’s brought Northeastern into alignment with the talent and diversity goals of numerous leading companies and agencies. By preparing students from diverse racial and socioeconomic backgrounds for STEM careers, the program is supplying the talent key industries are seeking to not only advance their technologies but broaden their perspectives on a human level. With S-POWER continuing to pay dividends, the team behind it is now looking to extend its gains through synergies with other efforts, including Engineering PLUS (Partnerships Launching Underrepresented Students), an initiative to develop 100,000 baccalaureate degree engineers among women and BIPOC by the year 2026.

“Learning from this particular grant effort will help inform our collaborations with multiple institutions to accelerate and implement evidence-based practices that impact the recruitment and retention of BIPOC and female students,” said Duggan. “So that’s the bigger umbrella.”

“We have an opportunity to address this on a national scale,” said Harris, “developing home-grown talent and diversifying that talent so we don’t leave any potential human capital that’s unrealized as it relates to engineering.”