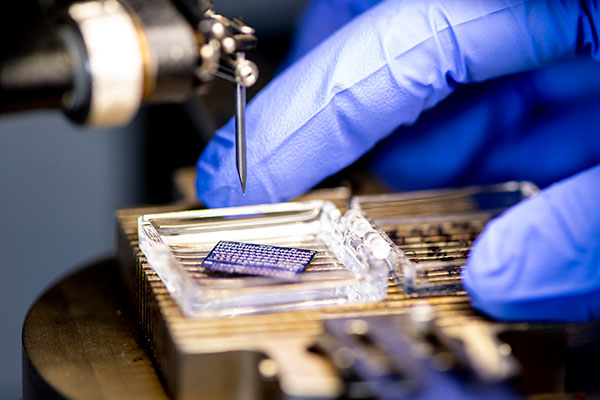 ECE Professor Matteo Rinaldi hopes that the shortage of semiconductor chips might spur innovation and re-imagining of the global supply chain and of the chips themselves.

A shortage of the semiconductor chips that serve as the brainpower in millions of electronic devices has stalled the production of everything from cars to cell phones and sent companies racing to buy up as many of the chips as possible before supply runs out.

Experts expect the shortage to last a couple years and will drive up the price of products in the short term. But it could also spur innovation and a re-imagining of the global supply chain as we know it, say two Northeastern scholars of engineering and supply chain management.

“In the immediate term, there’s no question that we’re going to see massive shortages,” says Nada Sanders, distinguished professor of supply chain management at Northeastern. “This is a great example of how supply chains work—a simple product can stall the whole assembly.” What started as a temporary delay in chip manufacturing as factories shut down during the COVID-19 pandemic has become a full-blown crisis: As vaccinations are distributed and global markets begin opening up, soaring consumer demand has outstripped factories’ limited capacity to fabricate chips.

Companies that use the chips in their goods, including General Motors and Ford—where semiconductor chips are used to regulate engine temperatures and stabilize suspension systems in high tech vehicles—have had to slash production. The Biden administration last week leaned on chip producers to increase their output, but Sanders says it still won’t be enough to mitigate massive shortages and skyrocketing prices.

“Everyone is fighting for the supply that’s already in the pipeline, but there’s only so much,” she says. “We have a very significant shortfall, and I don’t see that turning around quickly. You can’t rebuild the supply chain that quickly.”

This isn’t the first time the pandemic has disrupted global supply chains over the last year: Masks, hand sanitizer, cotton swabs, and even toilet paper were all in short supply at some point or another. The semiconductor chip shortage may end up being the final straw, Sanders says, that spurs a change in the entire system.

“It’s a lofty, but important, goal to reassess our dependence on global supplies,” she says. “The U.S. has been laid barren across industry sectors and bringing some of that manufacturing home in the medium and long term will be one of the answers.”

Manufacturing is so intertwined around the world that it would be nearly impossible for any one country to produce everything its citizens needed, but Sanders says that it doesn’t have to be one or the other—neither full reshoring nor total reliance on international trade.

“We’ve swung the pendulum too far in terms of really complex supply chains, and they’ve become so lean that there’s almost no excess inventory anywhere, because things flowed so predictably for so long,” she says.

Over the last half-century, semiconductor chip technology has been driven by size, Rinaldi says: Smaller and smaller chips packed with more and more transistors (the power hubs of such semiconductors) have enabled inventors to predict the next iteration of chip technology and design devices for it.

But manufacturers have reached a point at which the cost to make even smaller, more powerful chips dwarfs the possible uses of such technology, he says.

“We’re on the verge of a new era of technological innovation that goes beyond transistor scaling,” Rinaldi says.

What’s beyond chips? Nano-systems that are fully integrated into the devices they power, or perhaps quantum computing, Rinaldi says. Such technology exists now, but inventors haven’t yet figured out how to harness it to create a new generation of electronics.

“Nanotechnology now is where transistors were 50 years ago,” Rinaldi says. That is: They exist, but they haven’t been integrated into many mainstream designs.

“The desire for our electronics to sense, compute, and communicate keeps growing,” Rinaldi says. “We need to invent something that can keep up.”