"Northeastern was very good to me. I had a combination of a great group of friends, a few of whom have become family, and a series of good mentors." David Delaine
E'05, electrical engineering 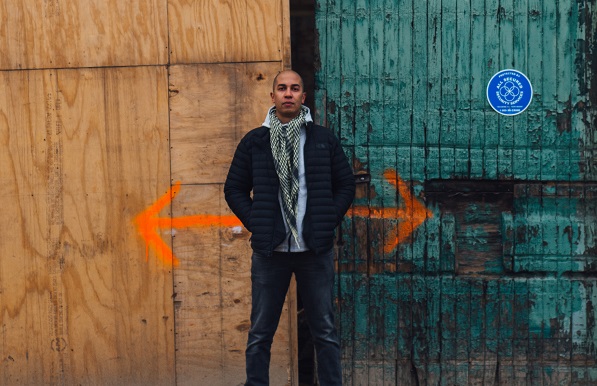 Northeastern graduate David Delaine, E’05, electrical engineering, was well on his way to a solid career as a consulting engineer, but life had other plans for him. A network of mentors and transformative experiences at Northeastern and beyond laid the groundwork for a career detour that led Delaine to pursue advanced studies and discover his passion for engineering education. Today he shares that passion with the next generation of STEM students as an assistant professor in the Department of Engineering Education at Ohio State University.

Born in Queens, New York, to immigrant parents from Martinique and Costa Rica, Delaine spoke several languages and developed a lifelong love of travel and culture, inspired by visits to his parents’ birthplaces. A move to Westchester, an experience that Delaine—who identifies as Black and Latino—found “culturally difficult,” gave him an innate understanding of how race and culture were manifested in the world and ultimately played a role in his career choice.

At 15, Delaine lost his father to suicide. Although he describes himself as “fairly numb” in the years following his father’s death, Delaine pushed himself relentlessly to get good grades, excelling in math and science. “I dug deep and told myself that I would just do everything I could so he would remain proud of me,” he says.

Accepted at several colleges, Delaine chose Northeastern where he was awarded the Ralph J. Bunche scholarship. His decision to study electrical engineering was, in Delaine’s words, “logical.” “All I knew is engineers make good money. I had no idea what it was. I chose it because I was told it was a good career.”

Describing his undergraduate experience, Delaine says, “Northeastern was very good to me. I had a combination of a great group of friends—a few of whom have become family to me—and a series of good mentors.”

Delaine recalls two successful co-ops, one with the Harvard University Engineering and Utilities Group led to what he assumed would be his career following graduation. He worked on power distribution with an influential mentor, Michael J. Rossini, who helped him parlay his experience into a job at an engineering firm in New York City. “I was all set to continue working beyond graduation until Richard Harris threw a wrench in the story,” says Delaine.

Prior to graduation, Delaine decided to attend the National Society of Black Engineers (NSBE) convention. Having missed the registration deadline, he learned he could go if he volunteered in the Northeastern booth with Richard Harris, assistant dean for Academic Scholarship, Mentoring and Outreach and director of Northeastern University Program in Multicultural Engineering, Diversity Programs. Harris pushed Delaine to go to the NSBE grad school fair. Delaine had no intention of going to grad school or the fair, but Harris was persistent.

At the fair, Delaine learned about the National Science Foundation LSAMP Bridge to Doctorate program. Intrigued, he decided to apply, secured the fellowship, and left his New York job behind, ultimately earning a PhD in electrical engineering from Drexel University in 2012.

Delaine concluded that advanced studies would provide the flexibility, income, and travel he desired. “I finally decided the PhD was for me,” he says. “I wanted to do electrification work in parts of the world that didn’t have electricity.” He followed his PhD up with the prestigious Fulbright scholarship and post-doctoral research in Brazil. He adds, “one hundred percent I’d be a consulting engineer without Richard Harris.”

After earning his BS in Electrical Engineering, David Delaine, E’05, earned his PhD from Drexel University as a participant in the LSAMP Bridge to the Doctorate program and is currently an assistant professor at Ohio State University.

There were other, subtler influences at Northeastern that played into Delaine’s personal and professional choices. He traces his early alignment to political action to campus protests he witnessed when the African American Institute building was torn down as part of the university’s expansion. “I was finding myself, kind of just hanging out, still healing in lots of ways,” he explains. “I realized that I hadn’t been involved and my undergraduate experience suffered. It shifted the trajectory of my life.”

He cites the impact of a sociology class, taught by the late Dr. Robin Kilson, as well as a sociology of music class taught by another mentor, the late Leonard Lewis Brown—a professional jazz musician and associate professor emeritus who held a joint appointment in the departments of music and African American studies. “I didn’t know it at the time but those [courses] were laying the foundation for what became my career,” he says.

While at Drexel, Delaine found himself in an electrical engineering lab. Having little research experience and wanting to be useful, Delaine began giving tours of the lab. “People liked it,” he says. Using smoke machines and lasers, Delaine turned the optics lab into “a club.” He began doing outreach to schools, performing demos using sound and music. “I found out what I was doing could be a line of work, that the field of engineering education exists,” he says.

Delaine became involved in supportive organizations—the International Federation of Engineering Education Societies and the Student Platform for Engineering Education Development—that helped him find his way in the field. “It’s how I fell in love with engineering education,” he says. “It’s about how you prepare engineers to do the work they’re doing in meaningful ways in the world we’re living in.”

In his current role, Delaine directs the Inclusive Community Based Learning Lab (iCBL) whose mission is to support the development of socially responsible engineering professionals through service learning, volunteerism, and outreach and broaden participation in engineering and STEM. “This form of teaching can also promote on a small and local scale social change, and have a positive impact on social justice,” he says.

One of the key areas that Delaine is researching under a National Science Foundation grant is the role of empathy in engineering. He notes that CBL is a platform for developing empathy in engineers, allowing them to deliver better solutions for their clients and ultimately make a more significant impact.

Summing up his journey from Northeastern to the present, Delaine says, “I was always taking the best opportunity in front of me, but I’ve tried to do it in a way that links to the things I care about. Wonderful mentors and lots of support led me to a place I love.”