"With the Summer Bridge program, you build a cohort of other underrepresented students. That's who my first study groups were with. They were my closest friends all through undergraduate years." Sarah Brown
PhD'16, electrical engineering 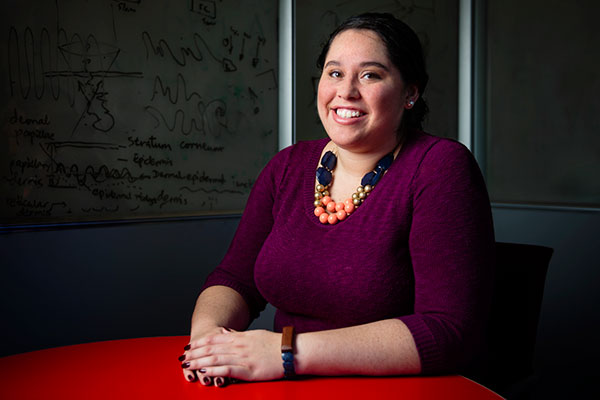 Sarah Brown is a true Northeastern success story: a ‘triple Husky’ who earned her bachelor’s in electrical engineering, E’11, master’s in electrical and computer engineering, ME’14, and a doctorate in electrical engineering, PhD’16. After completing her doctorate, she was awarded the University of California at Berkeley Chancellor’s Postdoctoral Fellowship and served as a postdoctoral research associate at Brown University. Today she is an assistant professor of computer science at the University of Rhode Island where her work focuses on fairness in machine learning and understanding how bias occurs.

It’s clear that Brown’s journey to success is the result of talent, drive, and hard work. She was also sustained by an academic environment that both nurtured and challenged her. Supported by a strong network of mentors and advisors, she sought opportunities in and out of the classroom that helped her grow and thrive.

Raised in southern New Hampshire, Brown developed an early liking for math. A Christmas gift from a family friend—a ‘learn to program’ game—spurred an intense interest in programming until she discovered the challenge of physics. When it came time to decide on a college major, she chose electrical engineering because a teacher advised her it was the most difficult course of study. “I want something hard,” she told herself.

Brown considered a number of engineering schools before choosing Northeastern. Invited to interview for a scholarship, she recalls that as part of the Electrical and Computer Engineering (ECE) department tour, she visited the sophomore circuits class lab. “It was application-focused, hands-on, and it started to make a lot of sense,” she says. “That moment, the hands-on learning, is what really sold me [on Northeastern]. They showed us examples of capstone projects and I remember thinking ‘these are so cool.’ It made it seem tangible and exciting that I could do all these real things.”

Bridge to the future

Before she even stepped into her first class, Brown participated in Northeastern’s Summer Bridge program. Designed for underrepresented students in engineering, the program extends the regular two-day orientation to a full week during which incoming students get a preview of freshman year coursework, gain valuable exposure to employers in the engineering industry, and connect with other incoming freshmen and upperclassmen.

“You build a cohort of other underrepresented students,” says Brown. “That’s who my first study groups were with. They were my closest friends all through undergraduate years.”

During the program, Brown first learned about the summer Research Experience for Undergraduates (REU) and the Gordon Center for Subsurface Sensing and Imaging Systems (CenSSIS), both of which she participated in as an undergraduate. “It’s how I got started in research, which led to my co-ops and to eventually becoming a professor,” she says.

Brown credits her co-op experiences with helping her figure out what she wanted. “That’s how I decided I really liked research, and I ended up doing research for all three of my co-ops,” she says. It was while she was at her third co-op at Draper Laboratory that she decided to pursue a doctorate. “All the people that had roles on projects I was interested in had PhDs,” she says. “Getting the PhD was the right way.”

“When I took national leadership positions, I was very well prepared by my BESS experience,” she says, noting that because of her involvement with BESS, she felt confident serving in a position on the board that oversaw the entire nonprofit organization—a $10 million budget and 30 staff members. She also learned key skills that would serve her well in her career: grant writing and learning to ask the right questions.

Many of the strongest influences during Brown’s 10 years at Northeastern were the mentors who guided her along the way and had a profound effect on her role as teacher and advisor.

Brown recalls working in the lab of her undergraduate research advisor, ECE Professor Carey Rappaport, during the first summer after freshman year. “I didn’t know what research was, or what a PhD was or what being a professor really meant,” she says. “He was the first person who ever said to me, ‘I think you want to be a professor.’ I didn’t believe him, but he was right. He gave me the idea … it was important to my trajectory.”

When it came time to find a PhD advisor, Brown chose ECE Professor Jennifer Dy who provided the support she needed to complete her PhD, while also making sure she took ownership of her projects. “It was a good balance of pressure to get things done and freedom to really choose what I wanted to do and determine my own course,” says Brown. “Her style of advising and training PhD students is something I’ve learned a lot from. For example, she took the time to make sure we knew how to write reviews,” a skill Brown describes as “essential.” “Her care and thoughtfulness in how she was training us are things I’ll continue to do with my students.”

Perhaps the most significant source of support for Brown came from the Summer Bridge program and its directors Richard Harris, assistant dean for Academic Scholarship, Mentoring and Outreach and director of NUPRIME, Diversity Programs and Rachelle Reisberg, assistant dean, Engineering Enrollment and Retention & director of Women in Engineering, Diversity Programs.  “He and Rachelle were always there,” she says. “Whatever was going on, that was the place I would go for whatever I needed.”

Of Harris, she says, “He shaped how I approach my work with students,” noting that he continued to provide support in her new role. “He connected me to his counterpart at URI. His introductions helped me get established at my new campus.”

In her current position, Brown teaches data science along with graduate courses on machine learning and society. Her research efforts focus on thinking about and measuring the concept of fairness in machine learning. “I’m collaborating with social scientists on applied data science projects,” she says. “I help them analyze data—how they measure and consider evidence of discrimination—and build tools to help them understand and monitor bias.” The goal, she says, is to determine how to minimize these biases, particularly gender and racial bias, and prevent them from affecting people down the line.

As she looks ahead to the future, Brown is focused on earning tenure and continuing to build up her interdisciplinary and applied research. “What Northeastern does, use-inspired research, is really important to me,” she says.

She is also committed to encouraging students like herself. “I care about student development and improving retention and diversity efforts,” she says. “Long term, I may think about moving into administration.”