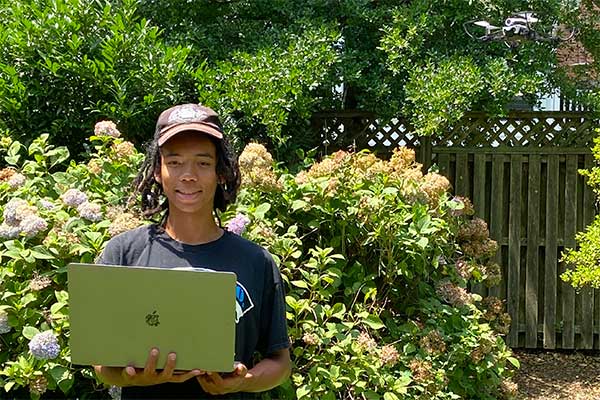 UPLIFT Scholar Zachary Walker-Liang, E’25, computer engineering and computer science, conducted research as a first-year student to enable a drone to survey an area and see if people are following social distancing guidelines and wearing a mask or not and report the data. After developing the software he implemented it onto the drone.

Zachary Walker-Liang, E’25, just completed his first year in the College of Engineering pursuing a combined major in computer engineering and computer science. A Washington DC native, he chose Northeastern because of his love of snow, the Boston skateboarding scene, and the university’s signature co-op program. He applied for early decision and was surprised to learn that not only was he accepted, but he was also admitted into the Honors Program, the Summer Bridge Program, and was selected for the Undergraduate Program for Leaders In Future Transformation (UPLIFT) Scholars Program.

The summer prior to his first semester, Walker-Liang was part of the Summer Bridge Program, which helped him transition into the engineering program. Through workshops, he learned how to effectively study for exams, familiarize himself with applications that would be used in his classes, and connect with faculty and students.

The UPLIFT Scholars Program was another opportunity for him to build a support network of faculty and mentors as well as participate in research projects as a first year student. In the Fall semester, Walker-Liang was paired with Dennis Picard Trustee Professor Mario Sznaier, electrical and computer engineering, where he joined team meetings discussing the computer vision and control research being done in Professor Sznaier’s lab. Computer vision is the inferencing and classification of images and videos by computers, and control is the analysis of the properties of systems.

In the Spring semester, he took a directed study elective course, and worked in Professor Sznaier’s lab on a project whose goal, as Walker-Liang explains, “is to have a drone that can survey an area and see if people are following social distancing guidelines and if people are wearing a mask or not and report all that data back to us.”

Walker-Liang worked on detection capabilities by training a neural network on his computer. To do this he gathered images of people wearing masks correctly as data and trained a program that allowed the computer to evaluate that data and learn to detect when people are wearing masks correctly. Through this data collection, he was able to teach the computer to identify the number of people within an area, how many people were wearing masks, and whether or not these masks were being worn according to recommended guidelines.

Walker-Liang’s UPLIFT Scholar experience continued during the Summer semester. He worked on campus implementing onto a drone the software created during his project in the Spring. He first created a program that autonomously controls the drone by allowing it to detect and follow a person’s face while the person is moving. Then, he improved the capabilities by making a script that follows a person in 3D space. This allows the drone, when close to a person, to decipher whether or not they are wearing a mask and if they are wearing a mask incorrectly. The drone can also decipher if people are standing 6ft apart, using a script from his research partner and fellow UPLIFT Scholar, Samantha Wong. Ultimately, he hopes that the drone will be able to fly itself, gather the information about COVID guidelines in the area, analyze it, and return on its own.

For the following Fall semester, Walker-Liang’s faculty mentor, Professor Mario Sznaier, connected him with a professor at the University of Texas to discuss the possibility of working on a project to create a 3D printing drone. This would be a great opportunity to implement what he learned in the Cornerstone of Engineering class such as 3D modeling. Also, all the research he has conducted and the skills he has gained will be beneficial to his career. Walker-Liang enjoys coding video games and working with robots and would like to continue developing computer software in the future.

The UPLIFT Scholars Program connected Walker-Liang to a community of mentors that he can always lean on to discuss his career, major, or class selection. “Having that mentorship really helps. I would never have reached out to Professor Sznaier; I wouldn’t have thought of doing it because there aren’t other undergrads in the lab,” says Walker-Liang.